This tale visits Biblical and modern times as it draws a parallel between two fateful eras. Noah and his family survive the worldwide destruction -- and vast destruction of another age lashes out as national hatreds erupt and World War I rages. 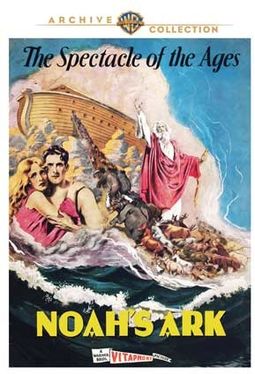 Two years after his last European film of the 1920s, filmmaker Michael Curtiz showed his range with this ambitious Warner Bros. production magnificently restored here to its fullest possible running length. Like the earlier The Ten Commandments, the two-pronged tale visits Biblical and modern times as it draws a parallel between two fateful eras. Colossal floodwaters roil, great structures topple, Noah and his family survive the worldwide destruction -- and vast destruction of another age lashes out as national hatreds erupt and World War I doughboys charge through the machine-gun hell of No Man's Land. The much-lauded flood sequence may have brought real-life doom with it: some sources say several extras drowned.

Directed by a young Michael Curtiz, this Warner Bros. epic had aspirations of becoming another INTOLERANCE (1916). In the end, Curtiz' treatise of man's inhumanity to man was ironically sabotaged by the enormous success of yet another studio release, the groundbreaking THE JAZZ SINGER (1927). Basically a quaint romantic melodrama set during World War I, NOAH'S ARK opens with American George O'Brien falling in love with German Dolores Costelllo while travelling on the Orient Express on the eve of war. The train wrecks and the two seek shelter at a nearby hostelry. Russian military officer Noah Beery tries to molest Miss Costello but is repulsed by O'Brien. The three meet again near the end of the war in a little French village, where Beery accuses Costello, now Mrs. O'Brien, of being a German spy. Placed before a firing squad, Dolores is saved in the nick of time by her husband, a member of the squad.The Germans use this very moment to bomb and all are soon entombed in the basement of a demolished building. Comparing the war with the Biblical account of the Flood, screenwriters Anthony Coldeway and Darryl F. Zanuck flash back to Miriam (Costello) and Japheth (O'Brien) at the festival of Jaghut. The climactic Flood (the filming of which brought Miss Costello a severe case of pneumonia) pulls out all the stops and is magnificent in UCLA's lovingly restored print. After the deluge, the story shifts back to war-torn France, where Costello and O'Brien are rescued by the Red Cross on the eve of the Armistice. Ready to be released, Warner Bros. withdrew the film in order to add several scenes of dialogue, considered a necessity after the unprecedented reception of THE JAZZ SINGER. The results were doleful: Ever so often, NOAH'S ARK comes to a screetching halt as the characters leave the realm of silent movies to speak stolid lines of dialogue. The cumbersome Vitaphone sound-on-disc made for pedestrian drama as everyone were forced to speak slowly and enunciate carefully. Dolores Costello, Warners' blonde leading lady and the off-screen Mrs. John Barrymore, suffered the most and would see her flourishing career all but evaporate. But UCLA's restoration of NOAH'S ARK proves once and for all that the rumors of Miss Costello having trouble with sibilants were highly exaggerated. It was Costello's line-reading of "Merthy, merthy, have you no thisther of your own'" in TENDERLOIN (1928) that supposedly sealed her fate in talkies. But even though the restored NOAH'S ARK shows little sign of the dreaded lisp, the hapless Miss Costello is visibly ill at ease before the microphone and her stilted dialogue, by Coldeway, is of no help whatsoever. "Part-talkies" like NOAH'S ARK were mercifully only a stop-gap measure; by the time of M-G-M's BROADWAY MELODY (released June 6, 1929), "all-talking, all-dancing" features had already freed themselves from the constraints of early sound technology.

Action | Bible Epic | Silent | War | Epic | Europe | Bible (The) | America
This product is made-on-demand by the manufacturer using DVD-R recordable media. Almost all DVD players can play DVD-Rs (except for some older models made before 2000) - please consult your owner's manual for formats compatible with your player. These DVD-Rs may not play on all computers or DVD player/recorders. To address this, the manufacturer recommends viewing this product on a DVD player that does not have recording capability.

Men Without Women
$19
Add to Cart