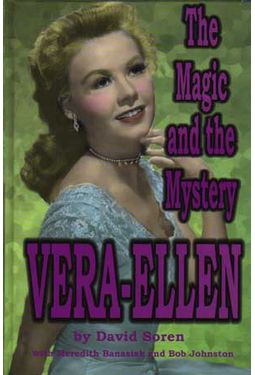 "She was one of the most wonderful people I have ever known. She loved life and was such a great friend and companion. I still have a picture of her hanging here in my office at Paramount. She was so nice and enthusiastic with everyone, especially with her fans always. She was such a dear, king person. She had a sweetness not only in her face but in her soul. I miss her very much even now and I am so pleased that something is being written to honor her talent and memory. I know she would have loved to be thought about again but, bless her heart, I don't think she would understand people being this devoted to her" - A.C. Lyles

Vera-Ellen should have been one of Broadway and Hollywood's most enduring stars. She was a fine dramatic and light comedic actress, and was considered by a number of authorities to be the greatest all-around dancer of her generation. And for a brief moment in 1950, she was an American household name, as famous as Babe Ruth, Joe DiMaggio or General Douglas MacArthur. She could do tap, toe dancing, adagio, modern dance (formerly known as dramatic dancing), comic dancing, partnered dancing, prop dancing, Apache dancing and advanced acrobatics. She could also sing well enough to be featured on Broadway and television. Her obsessive perfectionism was legendary; nobody worked harder on a routine or accomplished it with greater attention to detail. Not only were each of her steps perfect but the transitions from step to step were flawless and remarkably beautiful to observe. Like Fred Astaire, who admired her, she had the ability to make each complex routine seem effortless, as if she were expressing herself spontaneously.

Vera-Ellen's work in films such as On The Town, White Christmas, Words and Music, Three Little Words, The Belle of New York and Call Me Madame will never be forgotten by film musical fans. This much anticipated biography will not disappoint those fans.

74%off
This Is Spinal Tap (Cultographies Series)
$3.88 on Sale
Add to Cart

50%off
Robert Urich: An Extraordinary Life
$16 on Sale
Add to Cart

55%off
Forgotten Faces of Fantastic Films
$11.25 on Sale
Add to Cart