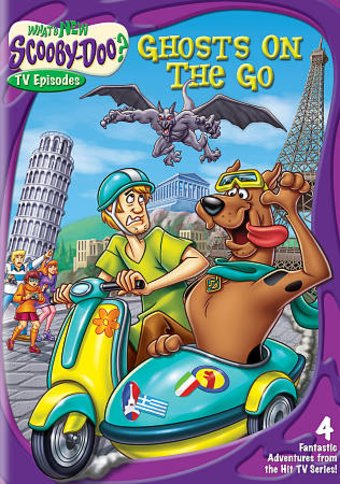 Shaggy's common refrain, "Scooby Doo, where are you'," finally has an answer: the dog and all his friends are here in WHAT'S NEW SCOOBY DOO' This latest incarnation of Scooby's adventures began in 2002 on the WB network and featured the characters everyone loves: Freddie, Velma, Daphne, and Shaggy all pile into the Mystery Machine and solve crimes with the help of their canine companion. Often, all it takes is a Scooby Snack to compel the reluctant dog into action. Though the animation is slicker, viewers can expect the same supernatural scenarios and mask-pulling revelations as the original show--with a dash of Information Age irony added to the nostalgic mix. And while all the main characters have new actors providing the voices, the original Shaggy, Casey Kasem, returns to provide the squeals of the high-strung hippie. This release of the series finds that ghost don't just confine themselves to America. Trips to Greece, Paris, Pompeii, and more provide plenty of ghoulish fun for the gang.

24%off
Scooby-Doo
Scooby-Doo! and the Skeletons
$7.60 Super Savings
Add to Cart

Scooby-Doo: Music of the Vampire
$18.70 Super Savings
Add to Cart

19%off
Scooby-Doo
Scooby-Doo! and the Gourmet Ghost
$12.10 Super Savings
Add to Cart

21%off
Scooby-Doo
Scooby Doo Double Feature - Scooby-Doo and the Monster of...
$7.90 Super Savings
Add to Cart