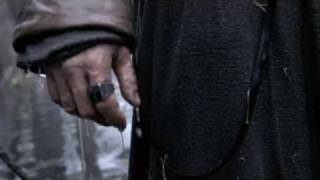 JADE WARRIOR director Antti-Jussi Annila crafts this transcendentalist shocker set in 1595, and following two brothers as they descend into a world where there is no such thing as salvation. Protestant Sweden and Orthodox Russia have just reached an uneasy truce. In the wake of their fighting, Finland has become a wasteland. Conquered Finnish brothers Knut and Eerik are polar opposites; one is a hardened warrior whose mind has been twisted by the horrors of war, the other is a gentle scientist with no use for fighting. Both have been assigned the task of denoting the new border between Finland and Russia, though they're about to commit a sin that will haunt them both for the rest of their days. After leaving a young girl to die an excruciating death, Knut and Erik forge ahead into an uncharted swamp, eventually reaching an unmapped town where their mere presence awakens a force of unspeakable evil. The girl has returned to haunt them, a horror that both brothers attempt to escape by washing away their sins in a mysterious sauna. But this sauna holds a terrifying secret, and in this godforsaken land there is no mercy for men who would permit such atrocities to be committed against a mere innocent.