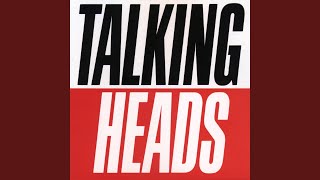 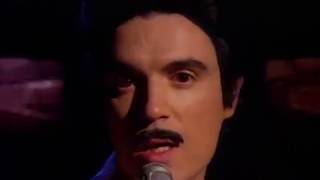 This is not the soundtrack to the movie of the same name. It contains the same songs, but performed by the Talking Heads. (In the movie, the various actors sing the songs.)
Talking Heads: David Byrne (vocals, guitar); Jerry Harrison (guitar, keyboards, background vocals); Tina Weymouth (bass, background vocals); Chris Frantz (drums).
Additional personnel: Tommy Morrell (steel guitar); Tommy Camfield (fiddle); Steve Jordan (accordion); Paulinho da Costa (percussion); The Bert Cross Choir, The St. Thomas Aquinas Elementary School Choir.
Principally recorded at Studio Southwest, Sunnyvale, Texas.
Audio Mixer: Eric "ET" Thorngren.
Recording information: Sigma Sound, New York.
Photographer: David Byrne.
Heads leader David Byrne directed the film True Stories, which layed out the surreal vision of modern American life often expressed in Talking Heads songs. In the film, the songs Byrne wrote for it are sung by the actors, but this album features the Talking Heads' own versions of those compositions. Though it came towards the end of their career, TRUE STORIES is perhaps the most '80s-sounding Heads album, the recordings full of compression, electronic percussion and synthesizers.
The songs pick up on the heavily rhythmic, world music-inflected sound the band established a few years earlier, but with more of a pop/rock compositional approach. Despite the relative lack of sonic experimentation or quirkiness, there are some solid tunes here, like the catchy, funky "Puzzlin' Evidence" and the album's sole hit "Wild, Wild Life," an ironic rocker that could have come straight off LITTLE CREATURES.

29%off
Talking Heads
More Songs About Buildings And Food
$11.98 on Sale
Add to Cart

Talking Heads
Fear of Music
$11.98 on Sale
Add to Cart