In this daring heist, the only color that counts is green 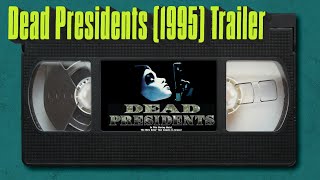 A young black man from Brooklyn leaves his girlfriend and his numbers-running mentor to fight in Vietnam in 1968 only to return three years later to find no welcome and little hope for him and his buddies. Unemployed and desperate, he plans and executes an armored car robbery to secure enough "dead presidents" (slang for cash) to give him a fresh start.

Dead Presidents
Get ready for action with this explosively exciting hit! On the streets they call cash dead presidents. And that's just what a Vietnam veteran (Larenz Tate -- MENACE II SOCIETY) is after when he returns home from the war only to find himself drawn into a life of crime. With the aid of his fellow vets he plans the ultimate heist -- a daring robbery of an armored car filled with unmarked U.S. currency! From the Hughes Brothers, acclaimed directors of the smash hit MENACE II SOCIETY -- you'll love every pulse-pounding second as these bold thieves risk it all for the score of a lifetime!

The year is 1968, and Anthony, a naive, sweet black teen from the Bronx, impulsively decides to join the Marines and fight in Vietnam. After a very disturbing tour of duty, Anthony returns home in 1973 to discover that a lot has changed: his country has turned its back on him, his neighborhood has deteriorated, and he finds that he's now a father. Furthermore, he's not making enough money to support a family, and matters become even worse when he loses his job.
Desperate, angry and confused, the young man decides to participate in a robbery of "dead presidents", or money. But the results of this crime prove less than fruitful.