Virginia Hill: Mistress to the Mob 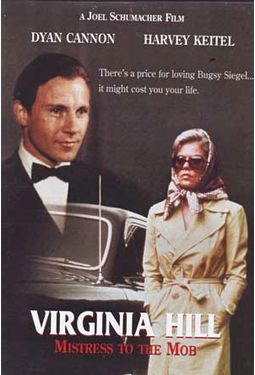 Out of Print: Future availability is unknown
Notify Me When Available
Add to Wishlist
Format:  DVD
item number:  67QVW
Also released as:
Virginia Hill: Mistress to the Mob for $17.90
91% recommend us!

Virginia Hill was a Hollywood socialite who hosted numerous parties in her stunning Hollywood home in the 1950s. Everything she was, everything she had, though, belonged to the Mafia. This 1974 biographical drama stars Dyan Cannon as the gangster moll who became a powerful player in the development of Las Vegas. Harvey Keitel plays Bugsy Siegel, whose love affair with Hill causes much conflict when debts are piling up in the creation of Siegel's vision of a desert oasis of gambling and entertainment.

Virginia Hill Story, The
Virginia Hill lived the high life in Hollywood in the 1950's. She and her home played host to endless nights of elegant parties where movie stars, businessmen and politicians came to call. Little did they know that nothing in the house belonged to Virginia - it belonged to the mob.
As their party host and good-time girl, Virginia hill had been sent to California to look after the mob's business interestes. And there was no business of more interest to them than Bugsy Siegel's plan to open a gambling resort in the middle of the Las Vegas desert. Thre was a lot of money invested in Bugsy - but Virginia had a more personal investment. Their love affair and the deep financial hole that was being dug in Vegas was about to upset some very important people. A price would have to be paid - and the price was on Bugsy Siegel's head.