Rolling Stone: 4 stars out of 5 -- "[H]e's never lost his acrobat-gremlin skills on the mic....Much of the album hews to the stark beats and melodies he loves rapping over." 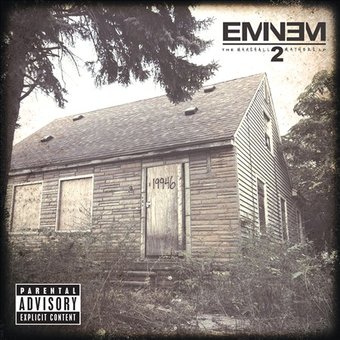 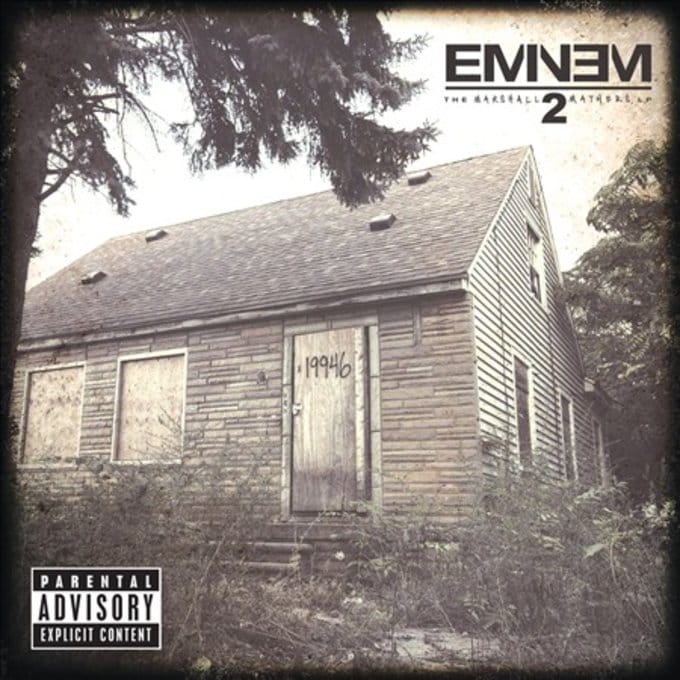 Rolling Stone - p.70
4 stars out of 5 -- "[H]e's never lost his acrobat-gremlin skills on the mic....Much of the album hews to the stark beats and melodies he loves rapping over."
Mojo (Publisher) - p.92
3 stars out of 5 -- "The appetite throughout THE MARSHALL MATHERS LP 2 is astonishing, the word count unassailably epic, the devil craftily concealed in the detail."

Recording information: Effigy Studsio; Larrabee Studios, Universal City, CA; Shangri La Studios, Malibu, CA.
Photographers: Jeremy Deputat; Paul Rosenberg ; Kevin Mazur; Jenny Risher.
After centering himself with the confessional 2010 release Recovery, Eminem entered his forties while watching his beloved city of Detroit literally go bankrupt. The cover here displays this descent with an updated picture of the rapper's teenage home, first featured on the MM LP of 2000 but now boarded up, and yet this 8 Mile child cares much more about the present than the past, as this vicious, infectious, hilarious triumph is no nostalgia trip, just the 2013 version of Marshall the experienced maverick on a tear, dealing with the current state of events and kicking up dust with his trademark maniac attack while effortlessly juggling his over-40 wisdom with stuff you'd slap a teenager for saying. Key cut "Rap God" is the quintessential track as it blasts out homophobic cut-downs and other inexcusable lyrics, because Marshall's the "Dale Earnhardt of the trailer park," but "I still rap like I'm on my Pharoahe Monch grind," and suddenly his Stan Lee-like origin story begins to take shape. Marshall is a super villain so familiar with hate and depression, he's powered by all shades of anger. Be it pissing off the neighbors (rocking the house with a some Beastie Boys and Billy Squier samples on the Rick Rubin-produced party starter "Bezerk") or being threatened by critics (and his biggest ever, too, as "Bad Guy" revisits the MM LP character "Stan" via his revenge-obsessed brother Matthew), it all feeds into his super nova, and it's a unique spectacle when it explodes. It does so gloriously on the stately arena rap anthem "Survival," which injects the listener with martial beats and a pre-game pep talk worth hearing. "Asshole" takes the decidedly low road to destruction, slapping girls "off the mechanical bull, at a tractor pull" while using controversy to make the front page, then offering the idea that he's "white America's mirror, so don't feel awkward or weird," because there's no sense in leaving the sewer if you don't crawl out enlightened. Love it or hate it, nourishing his same old murder fantasies is what drives Eminem to make the vital music found here, and yet there's room for polished and clever frivolity on the album. The grand "Love Game" with Kendrick Lamar whips a Wayne Fontana "Game of Love"-sample into a thrilling swagger cut, while "So Far." re-edits Joe Walsh's "Life's Been Good" so the Madden and MP3 generation can also understand the sweet irony of mansions filled with Kool-Aid-stained couches. Silly, manipulated voices and all, "The Monster" with Rihanna offers insight with its "I get along with the voices inside my head" attitude, then "Headlights" ups the game and offers mom an apology, referencing his earlier hit "Cleaning Out My Closet" and explaining it as an angry and irresponsible moment. Funny thing is, most of the best moments on MM LP2 are just as angry, and just as irresponsible, but like "Closet," this is the tortured soul and self-reliance ninja known as Eminem at his very best. ~ David Jeffries

61%off
Eminem
The Eminem Show
$6.60 Super Savings
Add to Cart