Cornell Campbell Nothing Can Stop Us

Mojo (Publisher): 3 stars out of 5 -- "That sublime voice has remained in pretty good nick as this team-up with London's Soothsayers illustrates." 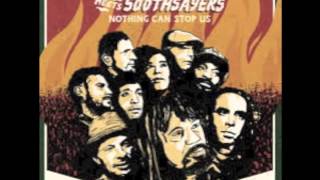 Cornell Campbell Meets Soothsayers - Nothing Can Stop Us (Music Video) 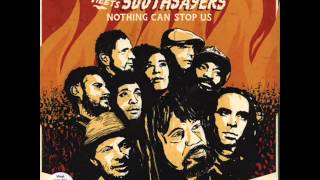 Mojo (Publisher) - p.86
3 stars out of 5 -- "That sublime voice has remained in pretty good nick as this team-up with London's Soothsayers illustrates."

Liner Note Authors: David Katz; Quinton Scott.
Recording information: Bunny Lee Studio, Kingston, Jamaica; Ironworks, Brighton; Red Earth Studios, London; Sonica, London; STAC, London.
Illustrator: Lewis Heriz.
Photographers: Alexis Maryon; Colin Porter.
With his sweet falsetto and smooth croon, Cornell Campbell is a heralded name for the reggae faithful, but he's often in search of a suitable showcase and seems to go years without finding one. In 2005, he experienced a career renaissance when he joined the German techno-dub team Rhythm & Sound on their single "King in My Empire," but it's been drips and drabs since then, and now it's a full-on flood. Part of the Strut label's collaborative series Inspiration Information, the wonderful Nothing Can Stop Us teams Cornell with the London-based dub crew Soothsayers, and while previous entries have found a reggae great meeting thoroughly modern producers (Horace Andy with Ashley Beedle being one example), it isn't the usual revelatory genre-buster. It is revelatory, though, as Cornell has found his ultimate backing band in this lively but anchored crew, who kick it into double-time overdrive during the great "We Want to Be Free." The track crackles with that Marley & the Wailers' energy, and yet the uptempo "Conqueror" steps both lightly and lively, playing to singer's strengths and winding up with that quintessential, dreamy, and majestic Campbell cut. The title track is an intoxicating mash of revolution music and lovers rock as "Nothing can stop us, we gonna take it slow" becomes a chant to chill the masses, and while most of the album plays it straight and earnest, "Never Give Up" is pure joy, supported by the boisterous, horn-driven funk of Soothsayers. Closing with a slow journey down a river called "Jah Jah Me No Born Ya," Nothing Can Stop Us is a triumph for the backing band, but Campbell's number has been due for years, and now that it's been pulled, it's time to wake the town and tell the people. ~ David Jeffries

Cornell Campbell
Dance in a Greenwich Farm
$24.80
Add to Cart

50%off
Dennis Brown
Reggae Sensation
$4.98 on Sale
Add to Cart

67%off
Ken Boothe
An Introduction To Ken Boothe
$4.98 on Sale
Add to Cart