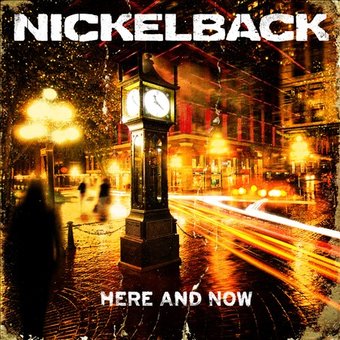 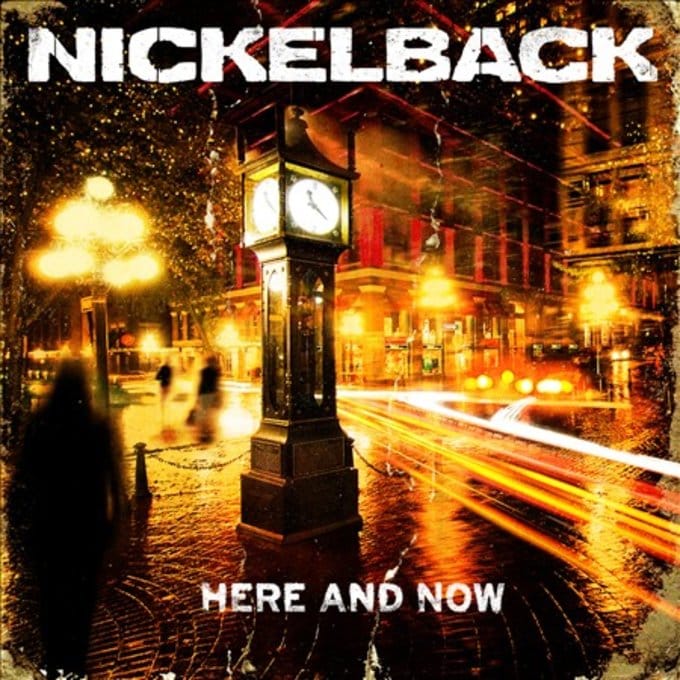 Billboard (p.56) - "The quartet comes out fixin' for a fight with the switchblade guitars of 'This Means War,' gets into full-on party mode with 'Bottoms Up' and pursues that ideal female on 'Gotta Get Me Some'..."

Personnel: Chad Kroeger (vocals, guitars); Ryan Peake (guitars, background vocals); Daniel Adair (drums, background vocals).
Audio Mixers: Chris Lord-Alge; Jay Van Poederooyen; Randy Staub .
Recording information: Mountain View Studio, Abbotsford, BC, Canada.
Editor: Scott Cooke.
Left to their own devices on Here and Now, Nickelback have embraced who they are. Chad Kroeger's brow is no longer furrowed, treating rock & roll as an ordeal; he's stepped back a bit, allowing himself to have a good time. Nickelback no longer rely solely on heavy-footed power chords set to lumbering rhythms. True, this signature sound still underpins much of Here and Now, but the group is now loose enough to throw in a disco-rock thumper ("Kiss It Goodbye," another in a long line of anti-Hollywood, anti-plasticity anthems destined to be staples in Hollywood strip clubs) and even dabbles in a bit of power pop on "When We Stand Together," giving it an actual swing, something unheard on previous Nickelback albums, and this isn't an isolated incident. "Gotta Get Me Some" abandons the brutal four-on-the-floor Nickelback signature in favor of an actual groove, and the group even sounds nimble on its power ballads. This, combined with a considerably broader sonic palette -- previous Nickelback albums were on a grayscale; this is defiantly colorful thanks in large part to so many guitar and vocal overdubs that the record sometimes feels like the Mutt Lange job the producer should have given them on Dark Horse -- turns Here and Now into what's Nickelback's easiest album to enjoy. ~ Stephen Thomas Erlewine

50%off
Nickelback
No Fixed Address
$6.98 on Sale
Add to Cart

Nickelback
Silver Side Up
$9.49 on Sale
Add to Cart

Nickelback
The State
$9.98 on Sale
Add to Cart

Nickelback
All the Right Reasons
$12.98 on Sale
Add to Cart

60%off
Nickelback
Nickelback Photo Album: The Videos
$3.98 on Sale
Add to Cart

50%off
Nickelback
No Fixed Address
$6.98 on Sale
Add to Cart

Nickelback
Silver Side Up
$9.49 on Sale
Add to Cart