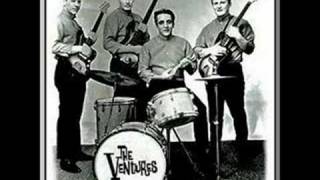 This debut album by the Ventures is surprisingly good, considering that it was recorded in a huge rush during an era when all concerned couldn't help but know that rock & roll albums (apart from those by Elvis Presley) generally didn't sell very well; indeed, the fact that this is so good speaks volumes about the class and talent of the group at this early point in their history. With a sudden and totally unexpected number two national hit in "Walk, Don't Run" and a burgeoning demand for live performances, the quartet went in and recorded the best 11 tracks they knew to get a long player together, all done in such a hurry that the members themselves couldn't stay around long enough to be photographed for the cover (those are stand-ins). The result is surprisingly sophisticated in its use of stereo (then still relatively unusual in rock & roll, stereo LPs only debuted three years earlier and were largely confined to classical recordings), dividing the sound of the band quite neatly on two sides, thus giving LP purchasers a treat that owners of the single "Walk, Don't Run" would miss -- not only the sound separation that was so prized by audiophiles of the era, but crisp presentation of each instrument, dividing the two guitars very neatly. Thus, the casual listener could play with the speaker settings and balances, and the serious fans could get in close on the actual playing. The material is a mix of originals and hits drawn from every category, including earlier rock & roll instrumentals ("Raunchy"), R&B "Night Train," and even film music ("My Own True Love [Tara's Theme]") -- one can just make out the familiar Max Steiner Gone with the Wind motif on the latter, and it is a fairly inventive approach to an old musical chestnut, rebuilding it from the ground up. The material all has a lean jauntiness, most unexpectedly "Night Train," which sounds closer in spirit to Chet Atkins than to Buddy Morrow or King Curtis. The originals were no filler, either, "The McCoy" being a hot piece of surf guitar showcasing all concerned. ~ Bruce Eder

The Ventures
The Fabulous Ventures
$13.30 CD Sale
Add to Cart