Still the man, any questions? 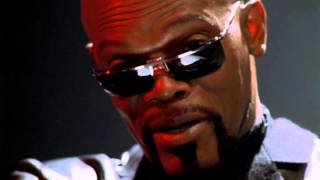 Samuel L. Jackson stars as detective John Shaft, a new-generation "black private dick who's a sex machine with all the chicks" in this stylish, action-packed update of the classic blaxploitation trilogy (SHAFT, SHAFT'S BIG SCORE!, and SHAFT IN AFRICA) from the early 1970s. Shaft's nemesis this time around is Walter Wade Jr. (Christian Bale), a cocky, blue-blooded white kid who commits a violent hate crime but still manages to skirt the system. When Wade forms an unholy alliance with powerful Dominican drug lord Peoples Hernandez (Jeffrey Wright) along with two dirty cops from Shaft's own precinct, Shaft turns in his badge to dispense justice on his own terms. Luckily for him, the original Shaft (Richard Roundtree, who is this Shaft's uncle) is around to help out, along with Vanessa Williams as a trustworthy cop, Toni Colette as an eyewitness to Wade's crime, and rapper Busta Rhymes as Shaft's man-on-the-street Rasaan. Director John Singleton (BOYZ N THE HOOD, HIGHER LEARNING) appears in a brief cameo, as does original SHAFT director Gordon Parks; the only creator missing is Ernest Tidyman, who wrote the novel that started it all. And SHAFT fans, take comfort--Isaac Hayes's remake of his classic theme is as funky as ever.

The classic blaxploitation picture from 1971 returns to the big screen with Samuel L. Jackson taking over the title role from Richard Roundtree. Jackson portrays Shaft, nephew of Roundtree's legendary John Shaft. The younger Shaft is a police detective, unlike his uncle, who was a private investigator. His latest assignment is to track down a murderer (Christian Bale) before he kills the woman (Toni Collette) who witnessed his heinous crime. The mere appearance of Roundtree, reprising his original role, gives the revamped SHAFT all the credibility it needs, but it is director John Singleton's spruced-up action sequences, as well as Jackson, that make the movie so entertaining.