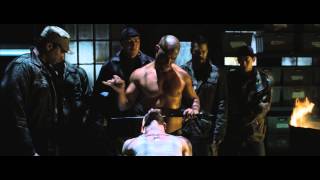 Based on the video game from Rockstar, MAX PAYNE stars Mark Wahlberg as a New York City cop out to avenge his slain wife and child, and heaven help anyone who gets in his blood-strewn way. The trail leads him into a network of shady characters mixed up with an experimental drug that causes super strength and fearlessness, as well as wild hallucinations of winged angels and demons. As Max gets closer and closer to the truth, he finds himself the target of a massive police manhunt, and in the crosshairs of the powerful kingpin behind the racket; soon enough, the angels and demons become downright deadly. Olga Kurylenko (QUANTUM OF SOLACE) is a beautiful Russian party girl who winds up dead after a late-night visit to Max's pad; her assassin sister (Mila Kunis) first goes after Max, then tries to help him get some answers. Rap star Ludacris (here credited as Chris Bridges) is a tough internal affairs cop investigating Payne's behavior.

Shot in an impressively grungy palette of high-contrast grays and blacks, with snow and sheets of rain soaking the grim atmosphere, New York City is brilliantly morphed into something like Gotham City by way of Detroit, with a touch of X-FILES-style supernatural dread looming over everything. Director John Moore knows how to stage his action scenes: offices blow up, big chunks of rubble crush police cars, bodies and shattered glass suspend in mid-air for some of the slowest slow-mo moments in action film history. Fans of the video game and/or action movies in general should get a kick out of all the mega-loud insanity, stylish design, and Wahlberg, who never changes his mean expression, but still commands the screen.

Experience action and excitement to the Max when Max Payne comes to DVD and Blu-ray featuring the theatrical film plus a shocking unrated extended cut not seen in theatres.
Mark Wahlberg delivers an explosive performance in this action-packed thriller based on the legendary, hard-hitting video game. Max Payne (Wahlberg) is a maverick cop with little regard for rules and nothing left to lose. Hell-bent on revenge, he's determined to track down those responsible for the brutal murder of his family, but his obsessive investigation takes him on a nightmarish journey where dark fantasy collides with stark reality. As the mystery deepens, Max is forced to battle enemies beyond the natural world...and face an unthinkable betrayal that will drive him to the edge of his own sanity.