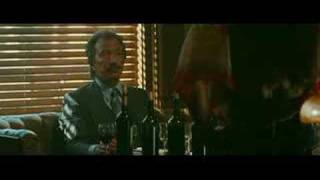 Looking for a way to boost his failing Parisian wine shop, a snobbish Brit named Steven Spurrier (Alan Rickman) heads to California's Napa Valley, preparing for a tasting contest he has set up, pitting his favorite French wines against up-and-coming vintages from California. He assumes that a victory by the French wines will spur people to flock to his store, but he is surprised to find that the California wines are not quite as awful as he had imagined. He is especially intrigued by a Chardonnay made by Jim Barrett (Bill Pullman) and his son, Bo (Chris Pine), at Chateau Montelena, but Jim is a perfectionist who never thinks his wine is ready and does not want to be involved in the contest, believing it will be a circus and an excuse to embarrass the California wineries. He has a tense relationship with his son, an easygoing surfer dude who seems more interested in the summer intern, Sam (Rachael Taylor), than working in the family business. Meanwhile, the rest of the Napa Valley vintners are excited about participating in the contest, including Gustavo (Freddy Rodriguez), one of Jim's best employees, who is making his own wine on the side with Garcia (Miguel Sandoval). As Spurrier gets closer to deciding which California wines will be selected for the contest, friendships and families threaten to tear apart and love blossoms. Based on a true story--Jim and Bo Barrett served as consultants on the film--BOTTLE SHOCK is a tasty treat, cowritten by husband-and-wife team Randall Miller and Jody Savin (with Ross Schwartz); Miller also serves as one of the editors and producers. Pullman is outstanding as the former corporate suit trying to live out his dream; the cast also includes Bradley Whitford and Eliza Dushku in small but important roles. The period soundtrack features several Doobie Brothers songs as well as 1970s tunes by America, Bad Company, and Foghat.

1976. Napa Valley. One small American winery and its workers are about to show the French that the world's finest wines will now come from the other red, white and blue. Based on an inspiring true story and starring Alan Rickman (Love, Actually), Bill Pullman (Nobel Son), Chris Pine (Smokin' Aces) and Rachael Taylor (Transformers), Bottle Shock is an "intelligent, affectionate, beautifully acted movie" (The Hollywood Reporter) that pours out the laughs.
For connoisseur Steven Spurrier (Rickman), there's no finer art than French wine, despite rumors that the new California wine country holds the future of the vine. Positive the small Napa wineries are no match for established French vintages, Spurrier challenges the Americans to a blind tasting. But when he finds the valley full of ambitious - and talented - novice vintners like Jim Barrett (Pullman) and his son Bo (Pine), he realizes his publicity stunt may change the history of wine forever.

A Walk in the Clouds
$5.80 Super Savings
Add to Cart