No warning. No control. No escape. 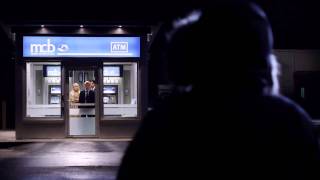 A murderous psychopath traps three co-workers in an ATM vestibule, and torments them over the course of one terrifying night in this thriller from BURIED screenwriter Chris Sparling and emerging director David Brooks. As night falls and their office Christmas party winds to a close, David and Emily are on the cusp of forging a real love connection when their fellow employee Corey requests a ride to an ATM for some quick cash. Just as the group prepares to get back in David's car, however, a menacing hooded figure emerges from the darkness. In addition to brutally murdering anyone who dares approach the ATM, the shadowy killer makes it frighteningly clear that any attempt to escape will end in bloody agony. As the mercury drops and the situation turns desperate, David, Emily, and Corey reluctantly prepare to play their attacker's sadistic game of life and death.