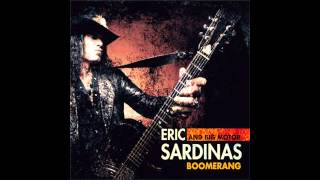 Boomerang is the third offering from Eric Sardinas & Big Motor. It marks the trio's recording debut with drummer Bryan Keeling, a session and touring ace who spent six years with Shooter Jennings & the .357s. Founding bassist Levell Price is back of course, and the band enlists a small and select list of guests on various tracks. Inside the recording's cover sleeve are the words "....dedicated to my friend Johnny Winter. Thank you for the memories.." Winter's influence on Sardinas' playing is incalculable and acknowledged. But on Boomerang, recorded after Winter's death, the music is a direct reflection of his unruly good-time spirit. Check the title track where Sardinas' phrasing combines both early Texas and Delta blues in the intro in the same fashion Winter did. Both acoustic and electrified resonators are placed on stun, wrangling over Price's fuzzed-out choogling bass boogie. When he takes his guitar break, one can hear traces of "Meantown Blues" in its cadence. The funky seven chords that introduce "Tell Me Your Mine" recall Johnny Winter And but the swampy, riff-laden crunch is pure Sardinas, all swaggering bluster and six-string fire. Keeling's fat tom-tom attack adds so much more to the bottom end -- even in the most basic shuffles -- than Chris Frazier's drumming did. It's less about the rock power trio tip and more about the blues rock pocket. "Morning Glory," a short, acoustically driven Delta-inspired rumbler, is a nice change of pace for this band, as are the boogie rockers "If You Don't Love Me" and "Long Gone," which come complete with ringing guitar hooks and Price's bass on ZZ Top throb. Leiber & Stoller's "Trouble" is done in classic Chicago style, but recalls Winter's rowdy ass studio sessions with Muddy Waters, while Howlin' Wolf's "How Many More Years" almost comes off the rails with its coil of careening, razor-wired waves of solo guitar -- playing boogie with this kind of swing reveals just how tight this band is. Boomerang is far more consistent than 2011's Sticks & Stones; it returns to the inspired and energized sound of the band's self-titled 2008 offering. ~ Thom Jurek

Robben Ford
A Day in Nashville
$10
Add to Cart