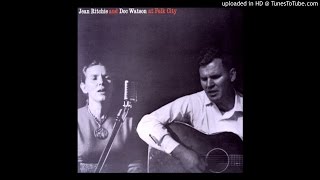 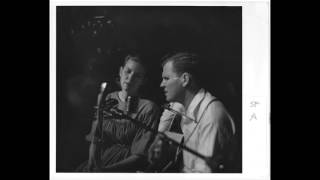 Personnel: Doc Watson (vocals, guitar); Jean Ritchie (vocals).
Recorded live at Folk City, New York, New York in 1963.
Contains 9 previously unreleased tracks.
Personnel: Doc Watson (vocals, guitar, banjo, harmonica); Jean Ritchie (vocals, dulcimer); Roger Sprung (vocals, fiddle).
Audio Remasterer: Joe Brescio.
Liner Note Author: Joe Wilson.
Recording information: Folk City, New York, NY (1963).
Photographer: George Pickow.
According to reissue annotator Joe Wilson, Doc Watson and Jean Ritchie had never heard of each other before they got together for a concert at Folk City in 1963, which says something about the 40-year-old Watson's obscurity at the time and about his limited knowledge of other performers, since 39-year-old Ritchie had been recording for more than a decade. The two had a lot in common, however, the North Carolina-born guitarist and banjo player sharing a repertoire of traditional material with the Kentucky-born dulcimer player. During their set (actually featuring only six songs performed together, with seven solos by Watson and four by Ritchie), they mixed murder ballads with spirituals and dance tunes. The titles included many songs that were familiar to country fans, and that would become familiar to folk fans as well: "Pretty Polly," "Wabash Cannonball," and "Amazing Grace." Especially interesting were "Go Dig My Grave," "Hiram Hubbard," and "House Carpenter," on which Watson played banjo and Ritchie sang. This was very much a joint appearance rather than a real duo outing, but the performers were sufficiently strong and complementary enough to make it work. (The 1990 Smithsonian/Folkways reissue added three tracks -- "East Virginia," "Blue Ridge Mountain Blues," and "Pretty Saro" -- to the original 1963 release.) ~ William Ruhlmann

47%off
George Jones
The Collection - Golden Memories
$7.98 on Sale
Add to Cart