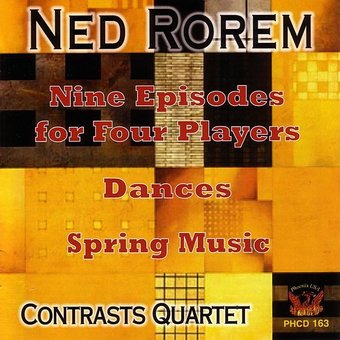 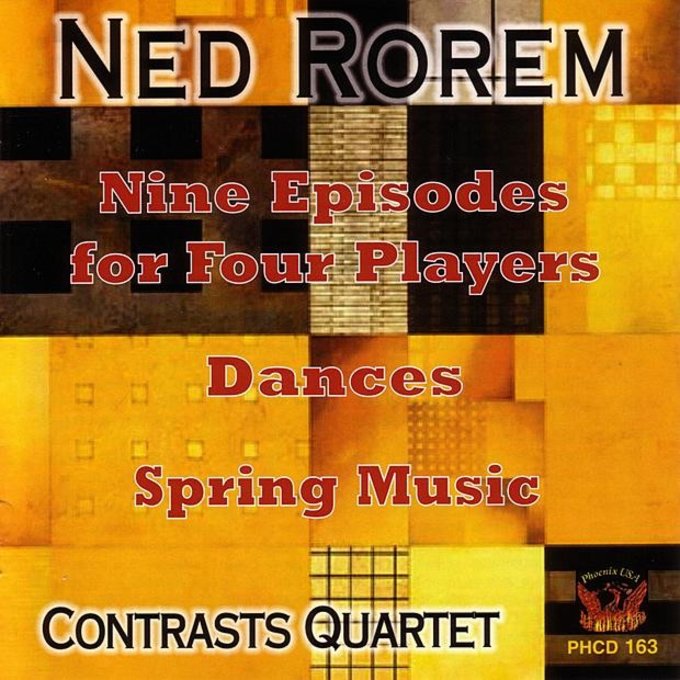 Dances for cello and piano from 1983 (which, like "Nine Episodes," is receiving its first recording here), Rorem's characteristic devices are melded to a lighter, more occasional purpose. A commission from the Music Study Club of Metropolitan Detroit, it circumscribed Rorem into using one "bowed instrument" and piano; he settled on the cello since he had never written for such a combination before. Rorem was in the final stages of completing Picnic on the Marne, a delicious suite of waltzes for saxophone and piano, when the Detroit commission came, and he continued his dancing bent in a brisk but affecting suite of seven movements. It was premiered by the cellist Jonathan Spitz and the pianist Frederick Moyer on May 6, 1984. Spring Music, written on commission from the Carnegie Hall Corporation for the Beaux Arts Trio, which premiered it on February 8, 1991, came in the midst of a bounteous Indian summer of Rorem's career, a spate of major commissions that included such important works as the String Symphony (for the Atlanta Symphony Orchestra, 1985), the Third and Fourth String Quartets (for the Guarneri Quartet, 1991, and the Emerson Quartet, 1994), and the evening-long song cycle Evidence of Things Not Seen (for the New York Festival of Song, 1997). For all of Ned's fabulous Frenchness, the expansive moods of Spring Music are reminiscent of the C Major Piano Trio of Brahms-a big, well-timbered piece simultaneously public and private, objective yet inscrutable. The work is in five movements. The Nine Episodes for Four Players come from a later, more difficult stage of the composer's life. Rorem lost his longtime partner James Holmes to AIDS in 1999, and the enormous amount of time devoted in care and worry exhausted him and decreased his productivity. The offer extended by the Contrasts Quartet, which commissioned the work along with the SOLI Chamber Ensemble, St. Paul's Music in the Park Series, and Pacific Serenades, was part of a reawakening to composition, and what we hear are the chiseled, economical gestures of an artist in winter-a savoring of truths, of musical emblems carried across the decades. (The Contrasts Quartet gave the world premiere of the piece on January 29, 2002 at New York's Merkin Concert Hall.)

70%off
Moscow Tchaikovsky Symphony Orchestra
The Music Of Alfred Schnittke (CD)
$5.98 on Sale
Add to Cart