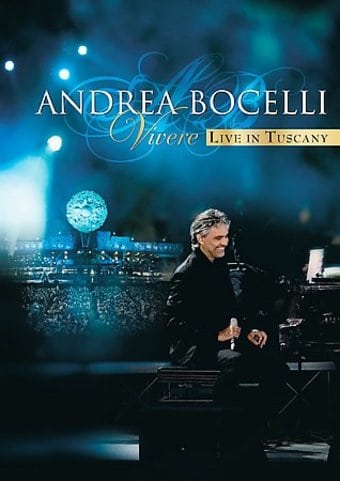 Andrea Bocelli returns to his roots for this special performance in rural Tuscany. The show was filmed in the town of Lajatico, where the acclaimed tenor grew up, and features 18 songs from Bocelli's back catalogue. Among the guests joining the celebrations are Kenny G, Sarah Brightman, and Chris Botti.

Known as one of the most talented voice in the light classical genre, Andrea
Bocelli has undoubtedly brought about international fame. Stepping into the lime light
in 1992, Bocelli made his entrance along side the late Pavarotti. Since his emergence, he has merged and has gained most of his success as a pop ballad singer, performing duets with artists such as Laura Pausini, Lang Lang, Heather Headley, Elisa, Sarah Brightman, just to name a few. Bocelli has release over Six flourishing albums, his last one in 2007 entitled "The Best Of Andrea Bocelli - Vivere, which has done very well in sales since its release. To compliment such release, Venemusic proudly presents a DVD with live performances and behind the scenes footage entitled Vivere - Live In Tuscany, with featuring artists such as Laura Pausini, Sarah Brightman, Lang Lang, Elisa and Heather Headley. All pop performances for the first time in his artistic career for all fans to enjoy!