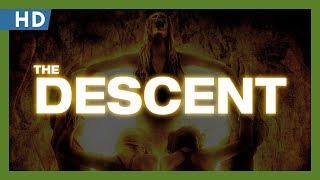 THE DESCENT, a claustrophobic and intense British horror film from Neil Marshall (DOG SOLDIERS), follows six courageous young women who venture down a deep, deep cavern in the Appalachian Mountain range. They are expert rafters and rock climbers--particularly the leader, Juno (Natalie Mendoza), and Sarah (Shauna Macdonald), who is still getting over the death of her husband and daughter the year before. Any healing and bonding is scuttled fast, however, once a cave-in cuts off their return route, forcing them deeper down into the darkness, their flashlight batteries dwindling with every wasted minute. The horror builds, the passageways get tighter and tighter, and then Sarah thinks she have seen something moving in the distance, something that looks almost human....

To give away any more would be a crime, but let's just say horror film lovers should find plenty to love here: there's gallons of gore, jump-in-your-seat shocks, and sly references to other films. The women characters are strongly etched, and excellent editing makes it possible to always know what's happening to whom, even as the flashlights are going out, the darkness is moving in, and the unholy screams are echoing off the cavern walls.