Live or die. Make your choice. 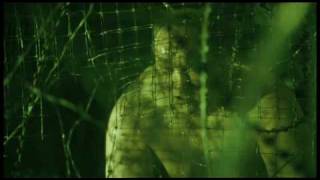 Be prepared to be scared. James Wan's directorial debut, written by and starring Leigh Whannell, is a violent, bloody, psychologically exhausting and exhilarating exercise in terror. Adam (Whannell) and Dr. Gordon (Cary Elwes) are chained in a vile, disgusting bathroom, separated by a bloody corpse holding a gun and a tape recorder. They are each given a saw--the only obvious way out is to cut one of their feet off. A serial killer who specializes in torturing morally bereft strangers is playing a game with them: Gordon has less than eight hours to kill Adam or else the doctor's wife (Monica Potter) and daughter (Mackenzie Vega) will be murdered. As the two men engage in a battle of wits, alternately trying to help each other and secretly attempting to win the game, a series of flashbacks reveals the history of the madman and the pair of detectives (Danny Glover and Ken Leung) handling the case. Some of the torture scenes are excruciatingly horrible and hard to watch, a real treat for fans of the genre. Inspired by the work of David Lynch (BLUE VELVET, TWIN PEAKS) and Dario Argento (SUSPIRIA, INFERNO), Wan has created a scintillating suspense thriller that will have audiences continually shocked, repelled, frightened, and surprised, right up to the very last second (which Whannell has said was influenced by the endings of such films as THE USUAL SUSPECTS and THE SIXTH SENSE). The accompanying heavy metal soundtrack is appropriately scary as well.