Blues With A Message
by Various Artists

Mojo (Publisher): 4 stars out of 5 -- "This riveting CD beckons the listener to another viewpoint, to stare in fascinated disquiet at the actual, rather than the imaginative, landscape of the segregated Old South." 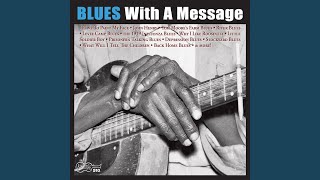 Dirty Linen - p.54
"[A]ll are composed by the feature artists and show a strong and passionate interest in social issues of the time."
Mojo (Publisher) - p.142
4 stars out of 5 -- "This riveting CD beckons the listener to another viewpoint, to stare in fascinated disquiet at the actual, rather than the imaginative, landscape of the segregated Old South."
Mojo (Publisher) - p.60
Ranked #2 in Mojo's "Top Ten Blues Albums Of 2005."

Liner Note Author: Paul Oliver.
Editors: Chris Strachwitz; Paul Oliver.
Blues With a Message isn't just about lost love and the toils of specific lives, the blues (particularly within the folk-blues traditions) spent some time dealing with sociopolitical issues on the side, primarily before the rise of electric blues. Here, Arhoolie has compiled a set of pieces related to a surprisingly large number of issues. Among them: Minstrel shows, the mechanization of cotton farming, and its related exodus to the North, sharecropping, segregation, the Korean War, the influenza epidemic, the New Deal, civil rights movements, Chicago employment opportunities -- all are given a song or two here. The music quality is roughly equivalent to many of the folk-blues recordings available, though the "big name" artists are largely absent from this one (Lightnin Hopkins does make an appearance singing about sharecropping, however). The songs are deliberately focused on the issues more than the music, but the music can still carry its soul. This one probably won't be on many highest-sales lists in the blues, but it's both historically important and musically enjoyable. ~ Adam Greenberg