Hatfield & the North The Rotters' Club

Get email alerts for Hatfield & the North
Currently Out of Stock: We'll get more as soon as possible
Notify Me When Available
Add to Wishlist
Format:  CD
item number:  ZSUR 11524
91% recommend us! 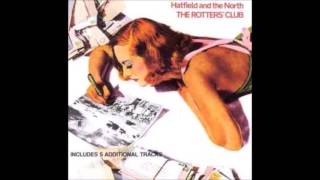 Hatfield and the North Share It Rotters Club (Music Video) 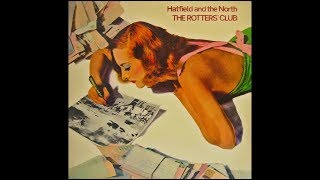 Displaying some of the most stunning musicianship ever associated with England's Canterbury scene, Hatfield and the North's second LP features, like their eponymous debut, Dave Stewart on keyboards, Phil Miller on guitar, Richard Sinclair on bass and vocals, and Pip Pyle on drums (supplemented by a few guest instrumentalists and the ever-ethereal Northettes with their "la la" backing vocals). The participants show an admirable sense of restraint and, like their Canterbury peers, are careful to avoid the pomposity and bombast of better-known prog rockers of the era, such as Emerson, Lake & Palmer and Yes. The Hatfields' convoluted instrumental passages segue into the occasional Sinclair vocal vehicle, in which the exemplary bassist sings in a polite and mellow croon that utterly avoids melismatic displays, histrionics, or over-emoting; in other words, his style -- closer to, say, Bing Crosby than, say, Joe Cocker -- would likely cause many 21st century pop music listeners to scratch their heads with bemusement. And the songs' rather whimsical lyrical content, while perhaps another conscious attempt to steer clear of the pretentiousness of the typically overbearing prog rock song style, certainly reflects a '60s/'70s mindset more than a 21st century one, so today's jaded listeners should realign their expectations. Things get off to a strong start with "Share It," a catchy little number with Sinclair expressing some idealistic and hard-to-criticize Brit hippie sentiments. Elsewhere, the "songs" are few and far between, but crop up in odd spots nevertheless; the Hatfields were masters of the segue and the most accomplished demonstrations of instrumental technique wind up bleeding into ditties that might seem out of place to some. But Stewart, Miller, Sinclair, and Pyle all make wonderful instrumental statements. Particularly noteworthy are Miller's two short jazzy numbers, "Lounging There Trying" and "Underdub," which, with their sparkling electric piano work from Stewart, have a light and airy improvisational feel despite rather thorough scoring; Pyle's propulsive "Yes No Interlude" with its furious melding of Stewart's keyboards and the sax of guest Jimmy Hastings; and Stewart's 20-minute opus "Mumps." The latter is particularly impressive, with everything anyone would want from an extended-form Canterbury-style workout. The piece ebbs and flows through nimbly executed thematic passages and variations, featuring one of Stewart's most compelling themes and also one of the best fuzz organ solos that he (or Mike Ratledge or David Sinclair for that matter) ever recorded. Smack dab in the middle of it all, another Sinclair-sung tune arrives, this time making punning use of letters of the alphabet. But the suite gets back on track with a dramatic instrumental coda, melding spacy effects, more great organ playing from Stewart, and spectacularly executed unison lines from Miller and Hastings in crescendo before the final fade. ~ Dave Lynch

Hot
Caravan
For Girls Who Grow Plump in the Night
$11.98 on Sale
Add to Cart

Hatfield & the North
Hatfield and the North
$17.50 Super Savings
Add to Cart

The Claypool Lennon Delirium
South of Reality
$15.40
Add to Cart

Gilgamesh
Another Fine Tune You've Got Me Into
$18.10
Add to Cart

Hatfield & the North
Hatfield and the North
$17.50 Super Savings
Add to Cart