Get email alerts for Uriah Heep
8 ratings
Out of Print: Future availability is unknown
Notify Me When Available
Add to Wishlist
Format:  CD
item number:  32GV3
Our customers love us! 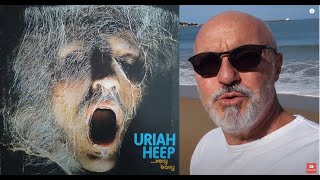 Uriah Heep: Ken Hensley (vocals, slide guitar, piano, organ, mellotron); Paul Newton (vocals, bass); David Byron (vocals); Mick Box (acoustic & electric guitars); Colin Wood (keyboards); Alex Napier (drums); Keith Baker, Ollie Olsson (drums, percussion).
Recorded at Lansdowne Studios, London, England. Includes liner notes by Ken Hensley.
CD contains 8 bonus tracks.
Seething proto-metallics blended with organ-whipped psych and blues, Very 'Eavy Very 'Umble finds the infant Uriah Heep still attempting to escape from the all-pervading influence of Vanilla Fudge and early Deep Purple. But David Byron's vocals are already among the most distinctive around, and Mick Box's guitar is already shredding eardrums. In other words, it was certainly very 'eavy, but 'umble was never a term that one would associate with Uriah Heep, not even in early 1970, fresh out of the youth center where they used to rehearse alongside the young Purple. Three songs opening side one of the band's debut album tell you everything you need to know about Uriah Heep's ambition -- the still-staggering "Gypsy," the mighty "Walking in Your Shadow," and, changing the mood without altering the intensity, the balladic "Come Away Melinda" -- add in "Lucy Blues," included on U.K. pressings of the album (it was replaced by "Bird of Prey" in the U.S.), and Heep stepped fully formed into being with this disc, and needed only to refine their vision to emerge triumphant. Unless, of course, you believed what you read in Rolling Stone. "If this group makes it," wrote Melissa Mills, "I'll have to commit suicide. From the first note you know you don't want to hear any more." ~ Dave Thompson