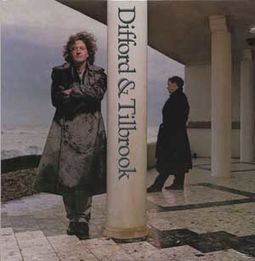 Get email alerts for Difford & Tilbrook
Available: Usually ships in 1-3 business days
12 copies available
Add to Cart
Add to Wishlist
Format:  Vinyl LP
item number:  WZLP 120
"WZ" coded vinyl LPs are in new and never-played condition, but are warehouse remainders. Most are sealed, however many have manufacturer's delete notch, drill hole, prior sale stickers and/or minor shelf wear. If you are not 100% satisfied with your purchase, our 30-Day Return Policy would apply.
Customers who purchased this item also bought these:
Stryper: Together as One (Vinyl LP) $0.29
The Alarm: Standard [UK Pressing] (Vinyl LP) $1.98
Al Stewart: Last Days of the Century (Vinyl LP) $0.98
Utopia: Oops! Wrong Planet (Vinyl LP) $1.98
The Motels: Shock (Vinyl LP) $6.98
Utopia: Deface the Music (Vinyl LP) $4.98
Don Dixon: Most of the Girls Like to Dance but Only Some of the Boys Do (Vinyl LP) $2.98
The Alarm: Change (Vinyl LP) $6.98
Spandau Ballet: Parade (Vinyl LP) $5.98
Victory: Don't Get Mad...Get Even (Vinyl LP) $12.98
Related products:
30-LP Grab Bag: Rock & Pop for $49.98
30-LP Grab Bag: Mixed Genres for $49.98
91% recommend us!

All tracks have been digitally remastered.
While Squeeze collapsed from physical and artistic exhaustion after Sweets from a Stranger, the band's songwriting duo soldiered on under the name Difford & Tilbrook for another release. Frustrated with the band's lack of commercial success -- and encouraged by the success of a similar stateside duo, Hall & Oates -- Difford & Tilbrook set out to craft an '80s contemporary blue-eyed soul record, emulating all the requisite synth washes and drum machines from early-'80s Hall & Oates albums like H2O and Private Eyes. The uncharacteristic cover shot, which features the duo in long, flowing robes and distinctly '80s big hair, played up this comparison -- this was clearly meant as a shot at the big time. All this may seem disconcerting, since Difford & Tilbrook had a distinctive style all their own and were seen as far less conventional than their American counterpart, but the album tanked on the charts precisely because it still sounded like Squeeze smothered by Tony Visconti's flat, lifeless production. This means it hasn't aged well, but is salvaged by two of the duo's best singles -- "Love's Crashing Waves" and "Hope Fell Down" -- and song-wise is a more consistent album than the schizophrenic Sweets from a Stranger. Over time, Chris Difford and Glenn Tilbrook would prove to be the only constant members of Squeeze anyway, making Difford & Tilbrook the lost Squeeze album and the missing puzzle piece between Sweets from a Stranger and Cosi Fan Tutti Frutti. Despite being far from the duo's best work (and it's certainly the rarest), serious fans will want to seek this out. ~ Jason Damas

93%off
The Weather Prophets
Judges, Juries & Horsemen
99¢ on Sale
Add to Cart

Kenny Rogers
Lucille / The Gambler
$5 on Sale
Add to Cart