The X-Files Fight the Future
by Elizabeth Hand 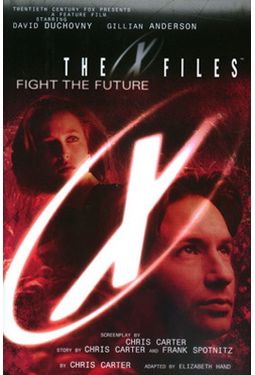 Beneath the surface of North Texas, something has been sleeping for more than thirty-five thousand years, since the last ice age until the present, when a group of young boys stumble upon something unspeakable deep inside a cavern. Their discovery draws the attention of the mysterious group known only as the syndicate--but will the syndicate save humanity, or bring on a viral Armageddon?

In nearby Dallas, FBI special agents Fox Mulder and Dana Scully save hundreds of lives from a terrorist attack on a federal building. But in the government investigation that follows, their careers--and lives--are on the line, as the bureau attempts to pin the blame on them.

Mulder and Scully's search for answers takes them from FBI headquarters in Washington, D.C., to a hidden laboratory on the Texas border and finally to a frozen wilderness, where their worst suspicions about a global conspiracy are confirmed. And when Scully is kidnapped and infected with an extraterrestrial virus, Mulder has only hours to find the antidote and his partner before it's too late - for all of us.

Nightworlds
99¢ on Sale
Add to Cart

Mistress of the Dark
99¢ on Sale
Add to Cart

50%off
Opened Time Capsules: My Conversations With Show Business...
$14.48 on Sale
Add to Cart

50%off
Fantastique: Interviews with Horror, Sci-Fi & Fantasy...
$14 on Sale
Add to Cart