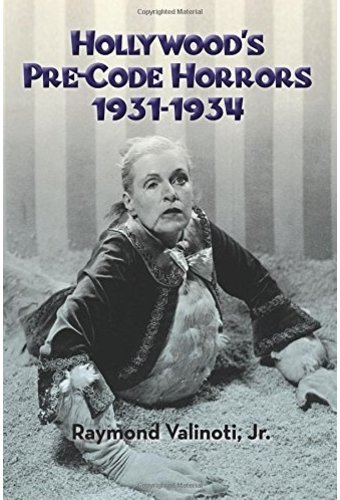 Currently Out of Stock: We'll get more as soon as possible
Notify Me When Available
Add to Wishlist
Paperback Book
item number:  BK 5558
91% recommend us!

In the first few years of the Great Depression, before the Production Code was rigidly enforced in 1934, Hollywood took advantage of its laxity, producing racy and violent films that titillated filmgoers and outraged reformers. The American horror genre blossomed during this time and the studios exploited its lurid possibilities. The results were both shocking and controversial. Some of these films remain unsettling today. Hollywood's Pre-Code Horrors 1931-1934 appraises all of these films, from Dracula (1931), which spearheaded the American horror market, to The Black Cat (1934), the last chiller released before the strengthening of the Code. Each film is thoroughly analyzed, not only in its insinuations and/or portrayals of sex and violence, but in the context of the era in which it was made and the reactions of critics and filmgoers during this time. Raymond Valinoti, Jr. is a resident of Berkeley Heights, NJ. He has a Master's in Library Science from Rutgers University and is a freelance researcher. He is also the author of Another Nice Mess: The Laurel and Hardy Story. His articles on films have been published in the magazines Midnight Marquee and Films of the Golden Age.