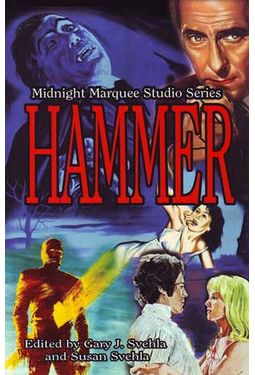 Currently Out of Stock: We'll get more as soon as possible
Notify Me When Available
Add to Wishlist
Paperback Book
item number:  BK 4417
Related products:
The Shrieking Sixties: British Horror Films 1960 to 1969 for $15.75
91% recommend us!

With the re-emergence of Hammer and their new releases including Let Me In (2010), which received critical praise, and their forthcoming 2012 release of The Woman in Black starring Daniel Radcliffe already garnering interest, we wanted to take a look back at our old faves and wallow in fond memories - even as we anxiously await their new films. So, for all those fans, who were vampire, Frankenstein and werewolf fans before it was cool, we offer a series of chapters on our favorite Hammer films. This book is not a complete listing of Hammer films - that's been done. Nor is it a chronological listing of their cinematic output. Rather it comprises articles from Midnight Marquee as well as several new entries that we think Hammer fans will enjoy.