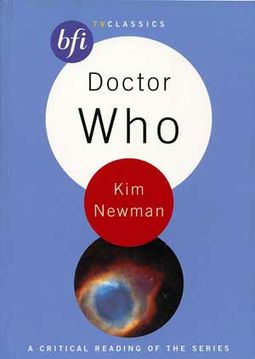 Get email alerts for Doctor Who
Available: Usually ships in 1-3 business days
LOW STOCK:
Only 1 copy left
Add to Cart
Add to Wishlist
Paperback Book
item number:  BK 3087
Related products:
Doctor Who - #073: The Monster of Peladon for $32.50
91% recommend us!

From 1963 to 1989 Doctor Who was a British TV institution. Over the years it developed a uniquely eccentric style, at once cosily familiar and cosmically terrifying. Many of its characters, creatures, and objects have become indelibly iconic: the Doctor and his assistants, the TARDIS, the Time Lords, and a nightmarish universe of monsters and villains.

The idea that the Doctor should have the power of regeneration was forced on the show's makers when William Hartnell, the original star, could not carry on. But the changing face of the Doctor became key to the evolution of the series and, for many, whole phases of life are summed up in the casting changes: Patrick Troughton, Jon Pertwee, Tom Baker, Peter Davison, Colin Baker, Sylvester McCoy and, in a one-off incarnation, Paul McGann. Even now, in the shape of Christopher Eccleston, the Doctor is set to return.

In this comprehensive study, Kim Newman follows the Doctor's travels through time, examining outstanding stories as well as prominent themes, recurrent characters, and monster types to assess the show as television masterpiece and cultural phenomenon.

47%off
Zacherley's Creature Features
$6.88 on Sale
Add to Cart

The Comedians Trivia Book
$7.47 on Sale
Add to Cart

44%off
Between the Laughs: Our Greatest Comedians Talk Seriously...
$8.39 Super Savings
Add to Cart

55%off
Forgotten Faces of Fantastic Films
$11.25 on Sale
Add to Cart

50%off
Opened Time Capsules: My Conversations With Show Business...
$14.48 on Sale
Add to Cart