Calling the Shots: Directing the New Series of Doctor Who
by Graeme Harper 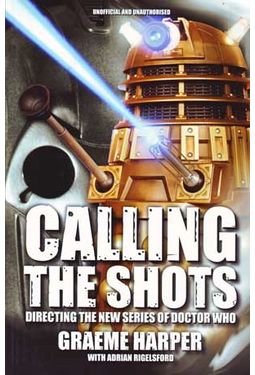 Get email alerts for Doctor Who
Available: Usually ships in 1-3 business days
LOW STOCK:
Only 1 copy left
Add to Cart
Add to Wishlist
Paperback Book
item number:  BK 2340
Related products:
Doctor Who - #073: The Monster of Peladon for $32.50
91% recommend us!

Calling the Shots brings a fascinating insight into the makings of the new Doctor Who by the director Graeme Harper. It is both a production diary and memoir of the making of a modern television drama.

Graeme Harper's association with Doctor Who began in the mid-1960s, and he directed some of its best-loved episodes in the 1980s. As the only director to have worked on both classic and new Doctor Who, Harper is uniquely qualified to reveal how the show's techniques have evolved.

The scripts have been delivered . . . what happens next? When Harper returned to Who, he found himself directing a very different show than the one he remembered, and rose to the challenge of bringing back the most popular monsters from the series' past?the Cybermen and the Daleks. Beginning from day one when the scripts arrived, fans are led through every stage of preproduction, including brainstorming creature and set designs, scouting locations, dealing with casting, figuring out the sheer mechanics of filming, and planning for some of the most complex effects shots the series had ever attempted. Attention is also given to the process of assembling footage, dubbing, scoring the music, and adding computer-generated effects?all done while time becomes tighter and the broadcast draws near. Every anxiety, challenge, and ultimate solution is covered through diary accounts and simple explanations from Harper's point of view. Illustrations show how storyboards transfer to the screen, diagrams detailing camera positions reveal how action scenes are covered economically, and shooting schedules illustrate how scripts are blocked to utilize any given location in the most effective way. Above all else, Graeme Harper conveys the excitement and challenge of making Doctor Who, revealing the answers to viewers' awed question, "How did they do that?"