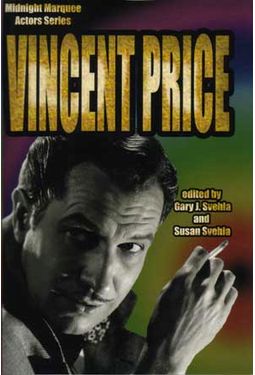 6 ratings
Currently Out of Stock: We'll get more as soon as possible
Notify Me When Available
Add to Wishlist
Book
item number:  BK 1316
91% recommend us!

Vincent Price, very outgoing and accommodating to his fans, nonetheless was still an immensely private man and little of his life outside the movies was ever revealed. Midnight Marquee Actors Series: Vincent Price focuses on the man as actor, both within films and beyond, and the purpose is to illuminate his professional and public life, not pry into his private life.

By rounding up the usual suspects - our writing staff extraordinaire - to cover all the important Vincent Price performances, the intent of this work is to create a chronological profile of Vincent Price, actor and cinematic icon. Chapters have been augmented by sections from two lengthy interviews that writer Lawrence French conducted with Price during the 1970s and 1980s (excerpts from which appeared in the truncated format in a few genre magazines), so the volume contains writers' subjective views on Price's performances alongside Price's own reflections of what it was like making the movies being discussed. As with the entries in the first three published Actors Series, we do not try to be definitive by covering every movie made, but by selecting the most influential ones from every era, we hope to offer the most complete and balanced portrait yet of Vincent Price the performer and the professional.

The fourth volume in the highly acclaimed Midnight Marquee Actors Series covers the film work of horror icon Vincent Price. In addition to his films, there is a chapter devoted to his radio work and another covering the stage play Diversions and Delights. The book also includes a never before published interview with Mr. Price by historian/author Lawrence French. A must for Vincent Price lovers.