If you are a collector or enthusiast, vocal harmony fan, music historian or just a music buff, you'll love this book! 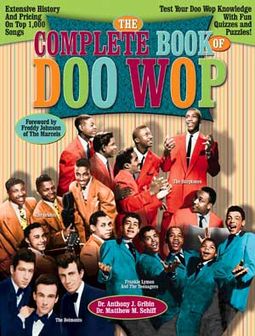 If you were a teenager in the 1950s and the early part of the 1960s, doo wop music conjures up memories of hanging out with friends at the candy store or malt shop, dancing at the hop, and first romances. This book will transport you back to those nostalgic times.

The Complete Book of Doo Wop provides an extensive history of doo wop from the 1940s through the early 1970s, gives definitions and illustrations of the music that falls between rhythm and blues and Rock 'n' Roll, and covers the musical groups that created it, including Frankie Lymon and the Teenagers, the Platters, Little Anthony and the Imperials, Dion and the Belmonts, the Chiffons and the Shirelles. The book also features 150 photos, 64 sheet-music covers and an extensive songography.

If you are a collector or enthusiast, vocal harmony fan, music historian or just a music buff, you will discover plenty of fun facts, stories and quizzes on doo wop songs and groups.

About the authors: Dr. Anthony J. Gribin and Dr. Matthew M. Schiff grew up and attended high school during the doo wop era. They met for the first time in 1975 and, roughly fifteen years later, decided to write a book on a subject they had always loved: doo wop music. Doo-wop: The Forgotten Third of Rock 'n' Roll was published in 1992. Years later, aware that there was much more of Doo wop's story to tell, they have written this book. Dr. Gribin, a clinical psychologist, and Dr. Schiff, a child and adolescent psychiatrist, both live in New Jersey.

87%off
Death Discs: An Account of Fatality in the Popular Song (Book)
$2.59 CYBER WEEK
Add to Cart

Customer Rating:
Based on 24 ratings.


If you are interested in the history of Doo Wop,this book is for you! You'll find information on groups like The Crests,The Harptones,Frankie Lyman & The Teenagers,The Belmonts and more! You'll find out how the term" doowop"came about and why this music has been so popular through the years! Quite frankly,if there was a course on doowop,this would be the textbook-that's how good this is!


Comprehensive content and an exceptional value. An excellent reference work on most of the original, local, & rather obscure groups. A must for the Doo Wop generation's musical library.


"Remember Me!!!" is the cry of all whom have walked this earth. The entertainers remembered here a re worthy of remembrance. Isn't it a blessing they can still be nheard via their recordings and videos!!!