The Who Classic Albums: Who's Next 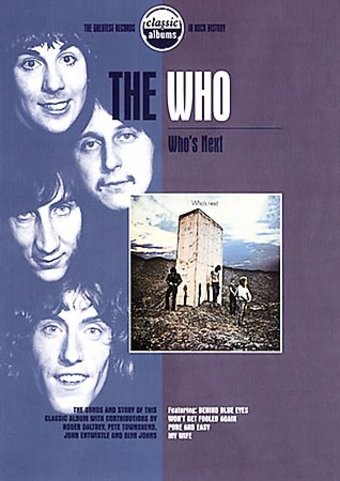 In a career of defining moments, WHO'S NEXT might just be the single greatest testimony to the songwriting talent of Pete Townshend and the musical power of The Who. This stellar documentary provides a behind-the-scenes glimpse into the making of the celebrated album, which was salvaged from the remains of Townshend's abandoned, overly ambitious sci-fi rock opera "Lifehouse." Featuring interviews with Townshend and surviving band members Roger Daltrey and John Entwistle, this episode of the CLASSIC ALBUMS series is a vital companion piece to the album itself, which includes such legendary hits as "Baba O'Riley," "The Song is Over," and "Won't Get Fooled Again." Early archival footage of the band performing classic tracks like "I Can't Explain" and "My Generation" help to further illustrate just how far the band journeyed to become one of rock-and-roll's most towering giants.

Released in 1971, "Who's Next" is viewed by many as the greatest testament to the songwriting talent of Pete Townshend and the musical power of The Who. The story of how The Who came to record the album is told by group members Pete Townshend, Roger Daltrey, and John Entwistle, together with contributions by those who were close to the group during this recording, also providing insight into the importance of the late great Keith Moon to the success of The Who. Included in this documentary are previously unseen acoustic performances of "Behind Blue Eyes" and "Won't Get Fooled Again," which prove the longevity and lasting appeal of "Who's Next."