Mondays in the Sun R 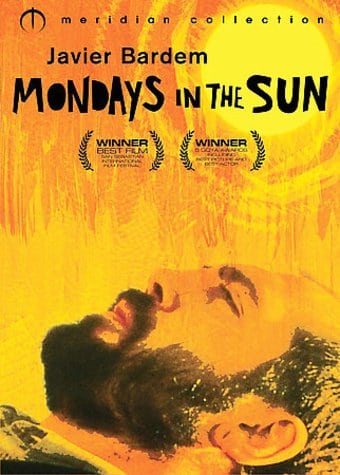 A northern Spanish coastal town suffers from its own isolationism as shipyards close down, leaving the labor force scouring the streets for temp jobs with only their stubborn pride to show for it. Among the disillusioned is Santa (Javier Bardem), a cocksure, angry rebel who refuses to admit his own failures. Santa is the ring leader of a group of rapidly aging friends whose unemployed status causes them mounting grief. They drown their sorrows in an otherwise empty bar owned by Rico (Joaquin Climent), one of their coworkers from what now seems another life. While Santa tries to clumsily seduce women and pay for a lamp post he vandalized in anger, his companions battle serious alcoholism, loan denials, and marriage troubles, as they all face their own insignificance.

Javier Bardem perfectly embodies the defiant loser that is Santa. Letting himself go and carrying a hefty gut, Bardem manages to exude the false charm of a bitter sad sack who has remained a lady's man. Captured in gritty detail, director Fernando Leon de Aranoa offers a shattered image of the proud work force of northern Spain in a picture that won five Goya Awards, Spain's equivalent to the Oscars.

On the Waterfront (Criterion Collection)
$34.50 Super Savings
Add to Cart

On the Waterfront
$18.30 Super Savings
Add to Cart

The Sea Inside
$12.10 Super Savings
Add to Cart