Exodus Pleasures Of The Flesh 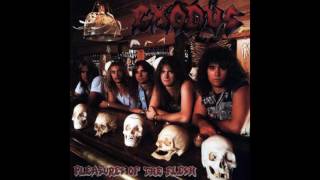 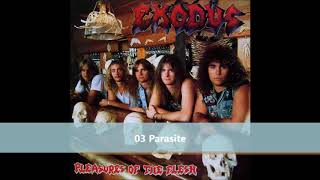 Personnel: Steve Souza (vocals); Gary Holt, Rick Hunolt (guitar); Rob McKillop (bass); Tom Hunting (drums).
This is part of Combat's The Remasters Of Metal series.
Despite their crucial involvement in the development of thrash metal, by 1987 San Francisco's Exodus were playing a game of catch-up. Upstarts Metallica had first stolen their thunder, then their guitarist, and after a yearlong delay that rendered their seminal debut, Bonded by Blood, rather archaic, the group experienced a tumultuous lineup change with the departure of founding vocalist Paul Baloff and the arrival of ex-Testament singer Steve Souza prior to the recording of Pleasures of the Flesh. By and large, the throat-shredding vocal styles of both frontmen proved to be pretty much interchangeable. ~ Eduardo Rivadavia

29%off
Megadeth
Countdown to Extinction
$8.49 on Sale
Add to Cart