All You Need Is Love, Volume 7: Diamonds As Big As The Ritz - The Musical 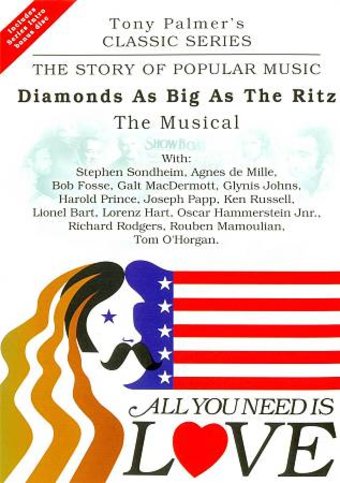 This documentary about the history of popular music in America focuses on the advent of the musical and how musical theater influenced the sounds of pop music. Artists featured in concert footage and interviews include Galt MacDermot, Agnes de Mille, and more.

This is the story of how a remarkable and very different number of theatrical elements were welded together into something also remarkable and very different called "the musical". From operetta, vaudeville, variety, burlesque, revue and most importantly British music hall came "the musical". But it did not come about by accident. It was the deliberate and conscious achievement of lyricist Oscar Hammerstein (who wrote, among others, "Showboat" and "Oklahoma") and the director Rouben Mamoulian. Against considerable opposition, both critical and commercial, they created a new art form which was unique and yet familiar. This episode includes interviews and performances from some of the genres main movers including Bob Fosse, Lorenz Hart, Richard Rogers, Oscar Hammerstein Jr., Glynis Johns and Lionel Bart.