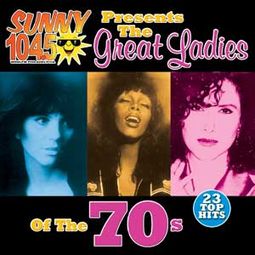 Each volume of the "Great Ladies" collection spans a decade of music from the greatest female artists in Rock & Roll. Every song is the original hit version by the original artist.

This CD was packaged for and promoted by WJMK, Chicago, Illinois.
This CD was packaged for and promoted by WSNI, Philadelphia, Pennsylvania.
Liner Note Author: Al Fichera.
Great Ladies of Rock & Roll The '70s offers 25 tracks of the best female-fronted pop music during a decade when soul was gradually giving way to disco. Any compiler would be hard-pressed to outdo the selection here, which includes a parade of top tunes: Jean Knight's "Mr. Big Stuff," LaBelle's "Lady Marmalade," Gladys Knight & the Pips' "Midnight Train to Georgia," Blondie's "Heart of Glass," Minnie Riperton's "Lovin' You," and more (and yes, they are the original recordings). As often happens, Collectables' focus on sound quality isn't top-rate, but for the low price this one is usually offered for, it's difficult to complain too much. ~ John Bush

40%off
The Temptations
The Definitive Collection
$8.40 Super Savings
Add to Cart
(10+)

50%off
Gladys Knight & The Pips
The Early Years
$5.98 Super Savings
Add to Cart