Prepare to get slapped...

Currently Out of Stock: We'll get more as soon as possible
Notify Me When Available
Add to Wishlist
Format:  DVD
sku:  XD 66172D
91% recommend us! 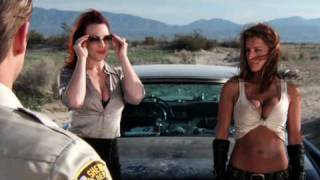 A sex-bomb, a psycho-slut, and a stripper find their attempt to extort a powerful underworld kingpin spiraling out of control in this outrageous homage to the exploitation films of yesteryear. They thought it was a foolproof plan, but these three bad girls are about to see just how bad things can get when the truth comes out, allegiances start to shift, and other desperate criminals attempt to muscle in on the take. Later, the stakes are raised when it's revealed that the entire plan was a setup. With the fate of the world resting in their not-so-delicate hands, these three violent beauties are about to discover that everything they thought they knew about the job is wrong, and that their may be an extraterrestrial invader lurking in their midst.