The Outlaw And The Beauty! 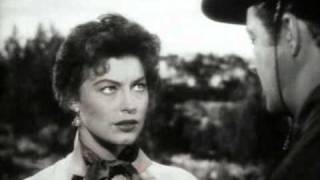 Vicious outlaw Jose Esqueda (Anthony Quinn) lives by what he calls the law of the bullet, terrorizing ranchers in post-Civil War Texas. At his side is his longtime enforcer and gunman, his adopted brother Rio (Robert Taylor). But Rio's allegiance, already wavering, may change for good after he meets recently arrived rancher King Cameron (Howard Keel)... and after he finds that King's stunning bride (Ava Gardner) is drawn to him. In the same year as this brooding, brawling tale of the West, versatile star Robert Taylor would be seen in other virile roles as a man of the sea in All the Brothers Were Valiant and as valorous Lancelot in Knights of the Round Table. John Farrow directs.

Set in the southernmost regions of Texas, RIDE, VAQUERO stars Robert Taylor as a steely-eyed gunman named Rio. In league with Mexican bandit Jose Esqueda (Anthony Quinn), Rio participates in the sacking of Brownsville. Only one man seems to have the intestinal fortitude to stand up to the villains: homesteader King Cameron (Howard Keel), who's already been burned out of one home by Esqueda and doesn't intend to allow it to happen again. Cameron's wife Cordelia (Ava Gardner) stands by her husband, which of course puts her in harm's way when Rio sets his romantic sights upon her.

Action | Civil War | Cowboys | Outlaws | Brothers | Mexico | Families | Weapons
This product is made-on-demand by the manufacturer using DVD-R recordable media. Almost all DVD players can play DVD-Rs (except for some older models made before 2000) - please consult your owner's manual for formats compatible with your player. These DVD-Rs may not play on all computers or DVD player/recorders. To address this, the manufacturer recommends viewing this product on a DVD player that does not have recording capability.