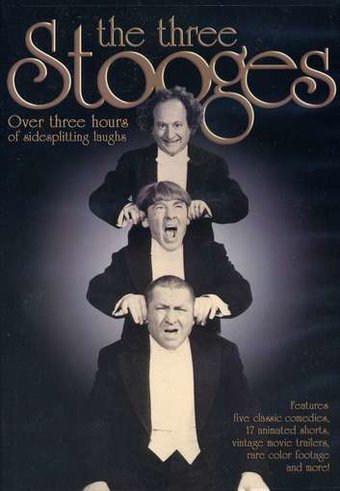 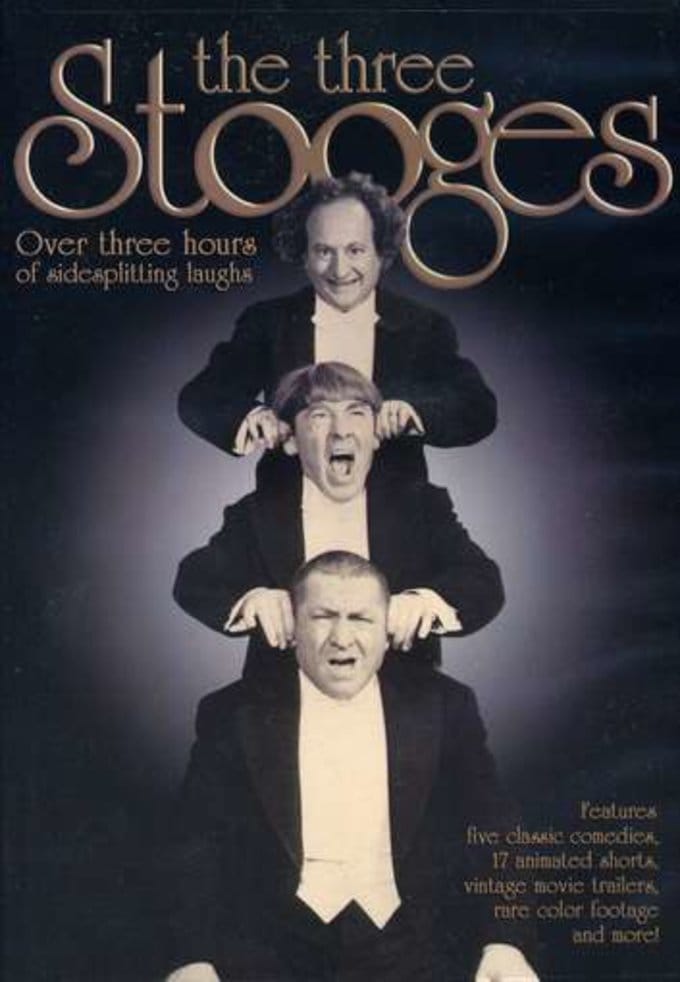 JERK OF ALL TRADES: Jerk of All Trades is a rare Three Stooges find, as it is the 1949 pilot created for ABC. In this special episode, Larry, Moe, and Shemp are hired on as house painters that do more home damage than home improvement!

3 LAUGH-FILLED TRAILERS OF THE THREE STOOGES FEATURE FILMS: Watch the actual movie trailers of this wacky trio, which are filled with scenes of the most hilarious stunts and uproarious antics from their feature films.

THE THREE STOOGES COLOR CLASSICS: Classic footage of the Three Stooges as you know and love them. See the Stooges as blundering bakers, kooky campers, and so much more!

THE THREE STOOGES COLOR CARTOONS: Includes seventeen sidesplitting animated shorts that will make you laugh until you cry!

DISORDER IN THE COURT: Often hailed as the best of the early Three Stooges' comedies, Disorder in the Court revolves around a courtroom murder trial when Larry, Moe, and Curly are brought in to testify for a dancer employed at The Black Bottom Café where the boys also work. But true to form, normal courtroom proceedings are interrupted by the outrageous antics of the blundering, yet lovable stooges. See if you can spot Moe and Curly's real-life parents seated in the courtroom!

THE BRIDELESS GROOM: In this comedy short, Shemp Howard plays a music coach who is bequeathed a half-a-million dollars by his wealthy Uncle Caleb, but there is one catch—Shemp must marry by six p.m. that evening. It seems like an impossible feat, but when he runs an ad in the paper that announces his problem, a throng of angry ex-girlfriends swarms him—all vying to get their mitts on Shemp and his money!

MALICE IN THE PALACE: Larry, Moe, and Shemp disguise themselves as a gigantic, but rather unbelievable monster and sneak into the palace of a sheik who has stolen a priceless diamond from Rootentooten's tomb. But it's not the diamond that they're after—it's the fifty thousand dollar reward for the diamond's safe return that they want. But can the bumbling boys fool the sheik, find the diamond, and pull this caper off? Find out on this sidesplitting, hilarious episode.

SING A SONG OF SIX PANTS: In this comic short, the Stooges are a trio of "unaccustomed tailors" in danger of having their equipment repossessed unless they can find a way out of debt. When the boys hear that a bank robber has broken out of jail and is on the lam, they plot to save their business by capturing the thief and turning him in for the reward money. The chaos that ensues occurs in true Three Stooges style.