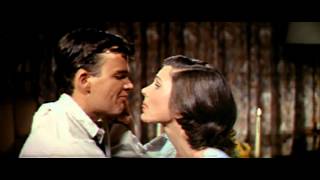 America was sprawling away from Main Street, transforming into a nation of bedroom communities within easy commute of the office. But what's going on in those bedrooms? Bob Hope intends to find out when he plays a Bachelor in Paradise. Always quick with a quip, Hope portrays Arthur J. Niles, noted author of books that offer worldly advice while documenting the lifestyles and love life of various cultures. His newest study: Paradise Village, a rambling new suburb in Southern California's San Fernando Valley. Lana Turner, in her only screen teaming with the comedy legend, portrays the stylish unmarried femme who works in the tract's sales office. Ah, looks like Paradise may somehow lose a bachelor but gain a comedy.

Romance author Hope goes undercover in a suburban California community in order to produce a best-selling expose on the mating habits of the natives. His plan goes awry when the housewives are (inexplicably) attracted to him. Turner's presence adds a sexy zip to the proceedings. Academy Award Nominations: Best Song ("Bachelor in Paradise").

This Bob Hope-Lana Turner starrer focuses on a writer whose intentions are misunderstood by a whole community of men.
In arrears to the IRS, floundering author Adam J. Niles travels to a California neighborhood to interview local housewives. He hopes this research will provide material for a best-selling book, and he can then pay off his debts.
Instead of his dreams coming true, however, Adam raises the ire of the women's jealous hubbies!