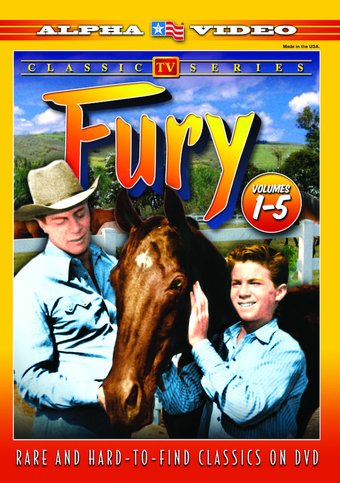 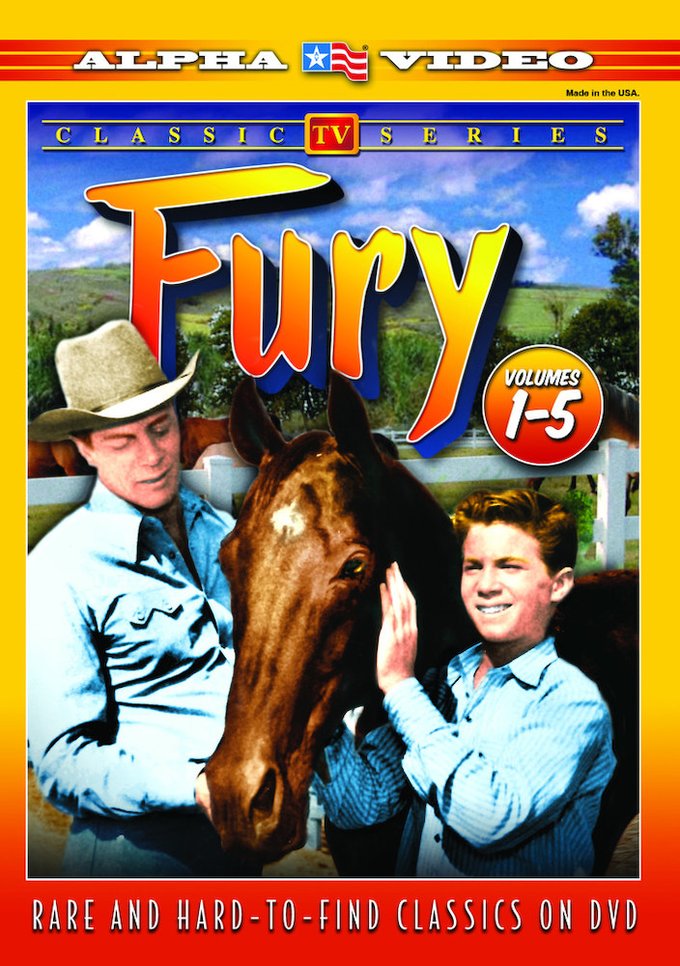 "Fury" originally ran on Saturday mornings on NBC from 1955 to 1960. The stallion Fury (trained by Ralph McCutcheon) became an award-winning star that appeared in other TV shows and movies, and was the subject of spin-off books, games, and puzzles.

Episode 1: Included in this collection is the rare pilot episode, "Fury of Broken Wheel Ranch," where we meet the orphan Joey (Bobby Diamond) who is taken in by widower, Jim Newton (Peter Graves). Jim owns a wild stallion called Fury that none of his ranch hands can tame - except young Joey! When the stallion is injured by one of the ranchers, Joey runs away to help the wounded steed. Jim and his friend Helen (Ann Robinson, of George Pal's "War of the Worlds") find them in the nick of time, saving Fury's life. Jim adopts Joey as his son, and so begins a lifetime of adventure for Fury at the Broken Wheel Ranch!

Episode 2: A stranger arrives claiming to be Joey's real father, threatening to separate the boy from Fury. Jim must act quickly to stop the impostor.

Episode 3: After a rabid dog bites Joey in the schoolyard, Jim and Fury must race against time to get him treatment.

Episode 4: When Fury is smitten by a white mare, young Joey's jealousy gets the better of him, and he lets the horses escape into the wild! With Helen's help, Joey brings them back!

The Horse Copter: A con man lures Joey in with promises of circus stardom but, as soon as he has Fury in his trailer, drives off without the boy.

Joey Goes Hunting: Pete is taken hostage by an escaped killer and Joey makes a valiant attempt to rescue him.

The 4-H Story: Joey is accused of theft when prize lamb disappears before the big 4-H competition.

Joey and the Gypsies: Joey comes to the defense of an innocent family of gypsies, framed by outlaws to cover up their rustling.

Joey Saves the Day: When a young boy's dad is bitten by a deadly snake, Fury and Joey must race to town to find a doctor.

Junior Rodeo: A bully tries to intimidate Joey when they compete for the State Rough Riding Championship.

Ghost Town: Joey stumbles across a bag of money buried by bank robbers. The boy finds himself pursued by armed and dangerous outlaws looking to retrieve their stolen cash.

The Hobo: Jim Newton hires a drifter who shows great skill with horses, but harbors a dark secret from his past.

Tungsten Queen: Con men plan to swindle old Hank out of the mine he has worked for years, even if it means murder.

Joey Sees It Through: A spoiled little girl runs away from home in an effort to sabotage her widowed mother's attempt to remarry.

Stolen Fury: A notorious gang of rustlers capture Pete and Joey, leaving them to die in a remote abandoned cabin.

The Choice: After Joey is blinded in a serious riding accident, Jim is forced to sell Fury.

The Miracle: A despondent rodeo champion, crippled in an accident, comes to convalesce at the Lazy R Ranch, while he searches for a reason to continue living.


I got these DVDs by recommendation. Probably one of my best DVD purchases this year.

The show tells us stories that happen in the Broken Wheel Ranch, where an orphan lives with his foster father and Fury, the semi-wild stallion. Plots are basic yet interesting, and make an attempt to be educational for kids.

Image and sound quality is good (if you remember it is a show from the 50s). There are some small fragments with slight AV desync, but nothing awful.

My main regret is that there are only 5 DVDs. The original series was much longer...