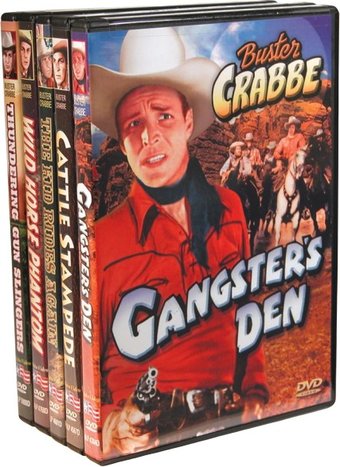 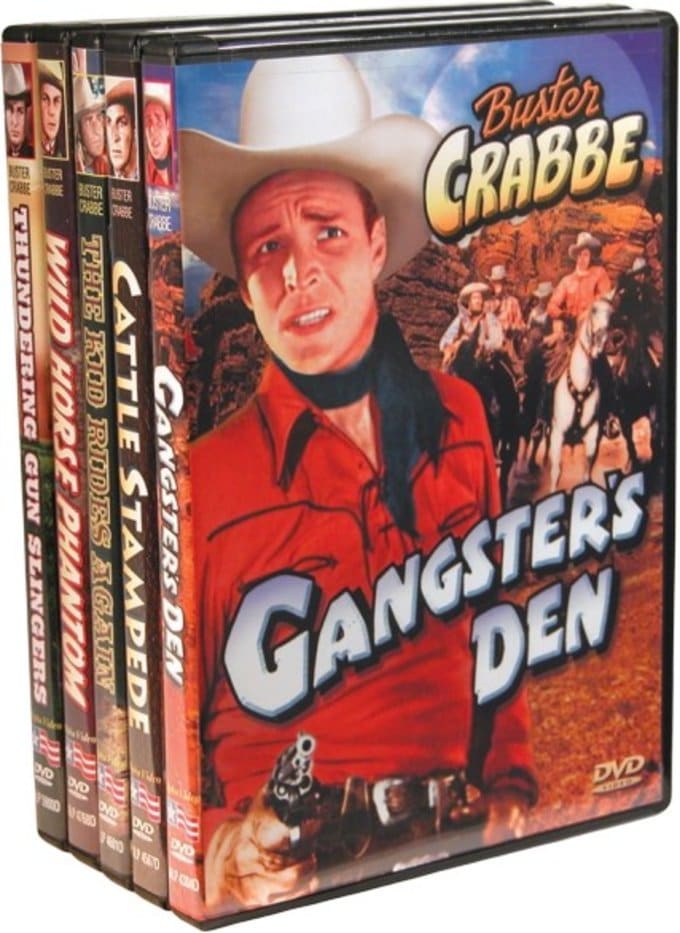 Gangster's Den (1945, B&W): Partners in a small gold mine, Billy Carson(Buster Crabbe) and his trail buddy Fuzzy Jone (Al "Fuzzy" St. John), try to stop a crooked lawyer and his gang of thieves from driving ranchers from their homes. The fast-talking lawyer will stop at nothing to grab up valuable property adjacent to a prospering gold mine. Most of the plots and devious schemes are centered around Old Taylor's Saloon, the popular hangout for cowboys and miners, and the barroom that Fuzzy winds up buying with a few sacks of gold dust.

Cattle Stampede (1943, B&W): On the run from a posse with a price on his head, legendary gunslinger Billy the Kid (Buster Crabbe) and his partner Fuzzy Jones (Al St. John) make their escape with the help of local rancher Ed Dawson. They return the favor by helping out at Dawson's run-down Circle X Ranch. Recent violence on the trail has left Dawson shorthanded for an upcoming cattle drive and he fears deadly sabotage at the hands of the rival Double Box Ranch. Undaunted, Billy agrees to lead the drive and take on the Double Box's shadowy gunmen.

The Kid Rides Again (1943, B&W): Wrongly accused of a holdup, infamous gunslinger Billy the Kid daringly escapes the law in search of the man who framed him. He meets up with his pal Fuzzy Jones in the troubled town of Sundown, where crime is on the rise and the sheriff is secretly controlled by the devious and money-hungry Mort Slade. When the Sundown National Bank refuses to sell Slade a mortgage, he and his brothers rob the bank forcing it to close. Risking everything to bring Slade to justice, Billy and Fuzzy confront the gang and engage in fist fights, shoot-outs and a deadly duel, while the town increasingly suspects Billy of being a thief and murderer.

Wild Horse Phantom (1944, B&W): Billy Carson (Buster Crabbe) must recover bank money that was stolen by recently imprisoned Link Daggett. Carson convinces the governor to allow Daggett and his men to escape, hoping the marauders will lead him to the cash. With his pal Fuzzy Jones (Al St. John), Carson follows the crooks to an old mine shaft where they have a series of supernatural encounters. Carson then realizes that Daggett can't remember exactly where he hid the loot. He must brave the horrors of the haunted tunnel to return the thieves to justice.

Thundering Gun Slingers (1944, B&W): A gang of vigilantes frame Dave Carson for rustling, and hang him without a trial. His hot-blooded nephew, Billy Carson, seeks revenge for the lynching. Billy takes over his dead uncle's ranch intending to find out who's behind the murders that are causing local cattle ranchers to sell out and flee. He suspects that "honest" businessman Steve Kirby is the vigilantes' leader. When Billy is jailed on trumped-up murder charges, he must escape before his appointment with the hangman's noose.

A box set designed expressly for fans of classic Hollywood westerns, this collection also pays homage to genre star Larry "Buster" Crabbe; he toplines each of the featured titles. These oaters include: GANGSTER'S DEN (1945), CATTLE STAMPEDE (1943), THE KID RIDES AGAIN (1943), WILD HORSE PHANTOM (1944) and THUNDERING GUN SLINGERS (1944).
This product is made-on-demand by the manufacturer using DVD-R recordable media. Almost all DVD players can play DVD-Rs (except for some older models made before 2000) - please consult your owner's manual for formats compatible with your player. These DVD-Rs may not play on all computers or DVD player/recorders. To address this, the manufacturer recommends viewing this product on a DVD player that does not have recording capability.