A 2-DVD bundle pack containing eight rare episodes of the long-lost TV series based on the long running radio show. 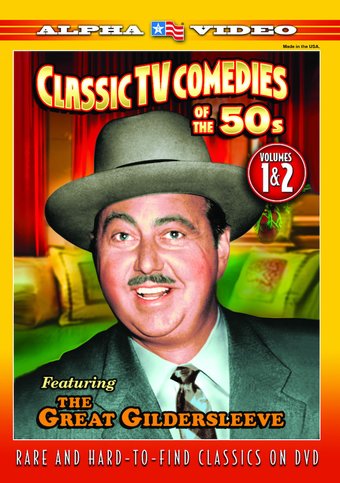 The Great Gildersleeve was a vastly popular radio show starring Harold Peary that followed the comical exploits of Throckmorton P. Gildersleeve. A spin-off character from the Fibber McGee and Molly Show, Gildersleeve was broadcast from 1941 to 1957 and was so well-received that Peary reprised the role in four motion pictures and three phonograph albums of children's stories in the 1940s. With Willard Waterman in the title role, 39 episodes were produced for NBC TV in 1955.

Practice What You Preach: Throckmorton advises his nephew on how to handle his love life.

Gildy Stews About A Cook: Gildy is wiling to go to great lengths to terminate the services of his housekeeper - even marriage.

One Too Many Secretaries: Mayhem ensues when Gildy's girlfriend replaces his secretary.

Gildy Goes Broke: Throckmorton attempts to teach his nephew not to live beyond his means.