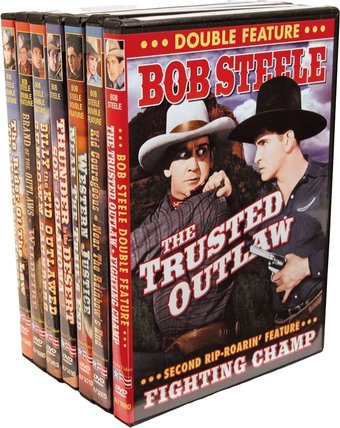 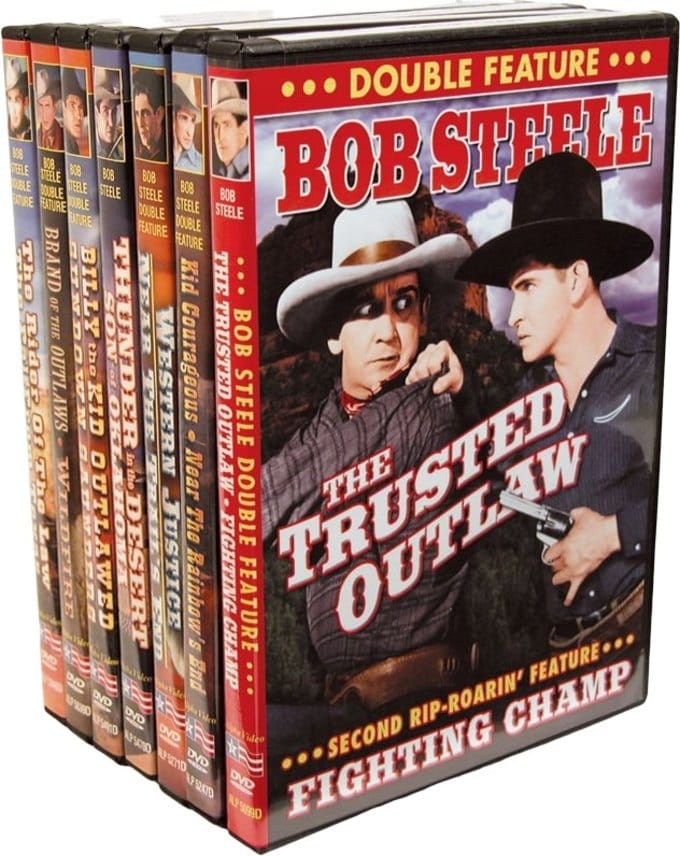 Bob Steele's 50-year career in film was predominantly conducted on horseback, as one of Hollywood's most popular cowboys. Born Robert Bradbury, Jr., Bob's show biz career began at age 2 when he was featured in the family vaudeville act. He made his film debut at 14, appearing with his twin brother, Bill, in silent comedy shorts by their father, Robert N. Bradbury,who directed many of Bob's later features, including Kid Courageous. Among his 150 films, there were several non-western departures for Steele which earned him critical praise - his role as Curley in Of Mice and Men (1939) and later supporting roles in The Big Sleep (1946) and The Enforcer (1951).

The Trusted Outlaw (1937, B&W): The last in a long line of outlaws, Dan Ward returns home after a mysterious absence. He's convinced that he can start a new life with his sweetheart Molly. She had betrayed him, however, and has taken up with his rival, Jim Swain. The Sheriff warns Dan that any attempt to settle his old score with Swain will not be tolerated. To prove that he's an honest man, Ward takes on the task of delivering a ten thousand dollar payroll to the employees of the Rockville mine. The catch - Jim Swain and his men have been waiting to rob whoever attempts to get the money through.

Fighting Champ (1933, B&W): Boxer Spike Sullivan and his smooth talking manager Nifty Harmon are canvassing the frontier searching for brave men willing to take him on in the ring. Rambling cowpoke Brick Loring unwittingly becomes Sullivan's next opponent by knocking out previous contender Jock Malone in a street fight. It seems the champ is a bit past his prime, though, and Nifty is looking to make sure that his man wins. After Brick rejects his offer of cash to take a dive, Harmon turns to Jock, who is more than happy to make sure that Loring loses the fight.

Kid Courageous (1935, B&W): Goldmine owner William Bannister is having theft problems at one of his digs, and the man he sent to investigate has disappeared. As a last resort, he sends his son Bob to get to the bottom of the mystery. Bob discovers much more than a gold robbery. Kincaid, the crime boss behind the mine job, is also forcing a young Mexican heiress into a sham marriage in order to grab her inheritance. A lady in distress is just the catalyst to kick Bob into high gear in a showdown with Kincaid.

Near The Rainbow's End (1930, B&W): Bob Steele stars in his very first talking picture! The Bledsoes are cattle ranchers and the Wilsons are sheep herders, and tempers flare when grazing rights become at issue. In the past, young Jim Bledsoe's romance with pretty Ruth Wilson kept the rivalry at a low simmer, but the Wilsons' new partner, Buck Rankin, is a hard- nosed troublemaker. Now the dispute threatens to boil over into a full-fledged range war.

Western Justice (1934, B&W): Three men on separate quests for justice take shelter from a howling windstorm in a deserted shack. Hiding their identities, they christen themselves "Ace," "Jack" and "King" during a game of cards. A friendship develops, and the men decide to pool resources and travel together. After six months on the trail, they ride into the small town of Red Ford, where an ongoing battle over water rights is about to boil over. A crooked businessman, John Brent, has secretly dammed streams to divert water away from the fields of local ranchers - all part of his plot to drive them out and seize their lands. By a twist of fate, Brent's Henchman, Clem Slade, just happens to be the very man that Ace, Jack and King are all searching for. Each of the three is determined to visit violent judgement on the bad men of Red Ford.

Near The Trail's End (1931, B&W): The lawless town of Cactus is little more than a cluster of saloons, gambling halls and seedy rooming houses, all controlled by a cruel, hard-drinking cattle rustler, Bart Morgan. In addition to ruling Cactus with an iron fist, Bart also keeps a very tight rein on beautiful caf? owner, Jane Rankin, by killing off all potential suitors and leaving their empty boots on Cemetery Hill. When the new marshal, Johnny Day, rides into town and takes an interest in Jane, he becomes Bart's next target. But double-crossing members of Bart's own gang turn his showdown with Johnny into a wild gun battle in the Cactus streets.

Thunder in the Desert (1938, B&W): Bob Radford is searching for his uncle's killers. When he and his partner Rusty arrive in town, the sheriff mistakes them for outlaws and pursues them. The chase is witnessed by a gunman, Reno, who invites the pair to join his gang. Once he has the outlaw's trust, Bob discovers his Uncle's gun in the criminal's hideout. He knows he's close to solving the mystery, but suspects that the murder was part of a much larger conspiracy.

Son of Oklahoma (1932, B&W): Ruthless gunman Ray Brent kidnaps John Clayton's wife Mary and his little boy Dan, stows them in a covered wagon, and rides off into the desert. The toddler falls off the back of the wagon and wanders away, lost and alone. Manuel Verdugo, a Mexican prosepector, discovers the child, sitting in the sand and playing with a large chunk of gold ore. Seventeen years later, Dan is a grown man - partners with Manuel in a gold mine claim. Ray Brent, still an outlaw and eager to steal the mine, tries to frame Dan for a stage robbery, but a woman with a dark, secret past intervenes.

Billy the Kid Outlawed (1940, B&W): Billy the Kid drives a herd of cattle to the Bennett ranch in Lincoln County, New Mexico. Unbeknownst to Billy, he's riding into the center of a savage power struggle between outlaw boss Sam Daly and the beleaguered sheriff. Daly is running in the upcoming election to replace the sheriff and seal his grip on the territory. Billy reaches his destination moments after Daly's thugs ambush and kill his good friends, the Bennett brothers. Outraged, Billy goes after the killers, capturing most of them. But it's too late - the election results are in and Daly is the new sheriff. He frees his gang and puts a price on the heads of Billy and his pals.

Sundown Saunders (1935, B&W): Jim "Sundown" Saunders wins a 640-acre ranch in a horse race, quits his job, and rides off to his new home. But he's not the only claimant to the property. John Preston, a sheepherder, and his beautiful daughter, Bess, have just moved into the ranch house, having paid $1000 to a con-man named Taggart. To keep Saunders from ruining his scheme, Taggart shoots a man and attempts to frame Sundown for the murder. Taggart joins up with a large band of outlaws who are planning to rob the local bank. The sheriff acquits Sundown and assembles a platoon of deputies to stop the gang, setting the stage for a violent showdown.

Brand Of The Outlaws: (1936, B&W): Cattle rustlers shoot the local sherrif, leaving him for dead. Cowboy Gary Gray discovers the wounded lawman, patches him up and rides him back to town. Later, when Gray encounters a group of men branding calves, he asks for a job, unaware that they're the same men who shot the sheriff. When a posse approaches, the outlaw gang rides off, leaving Gray to face the lawmen alone. One of the deputies, corrupt and violent Ben Holt, decides to mete out some instant justice, branding innocent Gray with the still glowing iron. Vowing revenge against both the gang leader and the deputy who branded him, Gray begins a one man quest to break the rustling ring for good.

Wildfire: (1945, Color): A magnificent untamed stallion named Wildfire becomes a four-legged fugitive when he's blamed for leading herds astray. Irate ranchers chase him through the hills and shoot him, but his life is saved by two wandering cowboys - Happy Haye and his pal, Alkali Jones. They nurse the steed back to health, incurring the wrath of the men who wanted the horse dead. Happy suspects that the horses that Wildfire is accused of chasing off were actually rustled by a gang of horse thieves headed by boss Pete Fanning. When Alkali is shot and wounded by members of Fanning's gang, Happy vows to bring the outlaws to justice, with a little help from Wildfire.

The Rider Of The Law (1935, B&W): An Arizona sheriff is gunned down by the notorious Tolliver Brothers gang during a bank robbery. The corrupt mayor appoints the town drunk, Buffalo Brady, to take the dead lawman's place, just as an unassuming "dude" from the east, Bob Malone, breezes into town. Soon Malone is tangling with the Tolliver gang himself, and two of the six outlaw siblings are accidentally shot dead. Malone is seen as a hero, and Brady quickly deputizes him. Now the gang is out to kill Malone, unaware of his true identity - he's an undercover Arizona State Marshal.

The Pal From Texas (1939, B&W): Mining partners Bob Barton and Tex Malden have struck gold! Soon to be rich, Tex starts a premature celebration before they even cash in their first bag of nuggets. When Bob discovers a drunken Tex at Ace Brady's saloon, about to gamble away their hard-earned wealth in a rigged card game, he drags him away. But Brady and his hired gun won't let that loot get away so easily. They break into the miners' cabin, steal the treasure and shoot Tex down, framing Barton for the killing. As the whole town searches for him, Bob fights to recover his good name and his gold.

For years, actor Bob Steele (1907-88) held court as one of America's most popular onscreen cowboys. This box set pays homage to Steele with fourteen of his most popular features, produced between 1930-45. Titles include FIGHTING CHAMP, NEAR THE RAINBOW'S END, WESTERN JUSTICE, SUNDOWN SAUNDERS, THE RIDER OF THE LAW and THE PAL FROM TEXAS.
This product is made-on-demand by the manufacturer using DVD-R recordable media. Almost all DVD players can play DVD-Rs (except for some older models made before 2000) - please consult your owner's manual for formats compatible with your player. These DVD-Rs may not play on all computers or DVD player/recorders. To address this, the manufacturer recommends viewing this product on a DVD player that does not have recording capability.