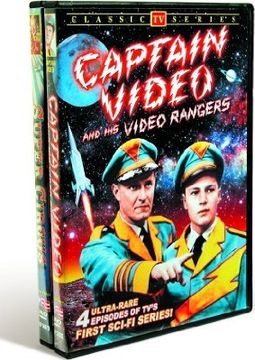 Since "Captain Video and His Video Rangers" was shot live, five days a week, breaks were needed for scenery changes and set-ups. To fill the time, the action would shift suddenly to a small TV screen, where" the delayed circuit remote carrier" would pick up the Captain's "agents on earth," who often bore a striking resemblance to western heroes Bob Steele and Johnny Mack Brown! Lacking sponsors in the early years, other breaks would be filled with Video Rangers hawking various tie-in merchandise, such as the famous "Ranger Ring" - proof positive "should anyone question you of your identity as a Video Ranger." In other spots the Rangers would deliver patriotic messages, imploring young Rangers at home to practice racial tolerance and good citizenship.

These four extremely rare episodes feature both Al Hodge and Richard Coogan starring as Captain Video. Some of the originally broadcast commercials included here provide unforgettable, politically incorrect moments, such as when the announcer assures kids that their favorite breakfast cereal is "coated with candy!"

Super Circus, Volume 1: With her all-American sexiness, Mary Hartline became one of the first stars of television and made Super Circus a runaway hit. Appearing in her spunky majorette suits that featured her perfect legs, Mary would lead the Super Circus Brass Band with baton twirling and her long blonde hair flowing. Joined by real-life circus barker turned announcer, Claude Kirchner, and clowns Cliffy, Nicky and Scampy, the Super Circus regulars would be joined by the world's greatest animal and acrobatic acts, on loan from Ringling Brothers and Barnum and Baileys Circus. Complete with the original commercials, these six episodes will entertain kids of all ages.