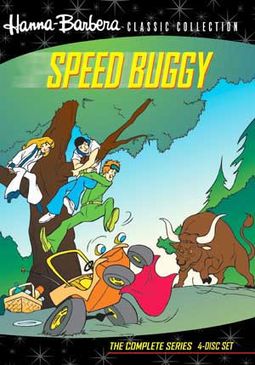 Don't let the sputter and cough fool you: Speed Buggy is one fast-wheelin' hero who always saves the day! Designed by master mechanic Tinker and his friends Debbie and Mark, Speedy can bolt, zoom, fly, dig, swim, and float his way to the finish line for racing thrills you won't believe. In this 4-Disc, 16-Episode Complete Series Collection, Speedy and the gang zip around the world, collecting winner's trophies and fighting diabolical criminals, including Dr. Kloog who plans to build an army of slave cars, or Professors Krishna and Digby who use an invisibility potion to steal ancient treasures. Speedy's daring adventures abound with diamond thieves in Africa, a crazed pirate who intends to take over the oceans and a civilization of Amazon women with a mind-control machine, plus more evil villains that only Speedy can outwit. Take your family on a ride they'll never forget with Speed Buggy!

This release contains every episode of the animated Hanna/Barbera series SPEED BUGGY, which followed the adventures of three friends and their remote controlled car.

60%off
Busytown Mysteries: The Biggest Mysteries Ever
$3.98 on Sale
Add to Cart