The complete collection of all six Mr. Wong mysteries in a 6-DVD bundle pack. 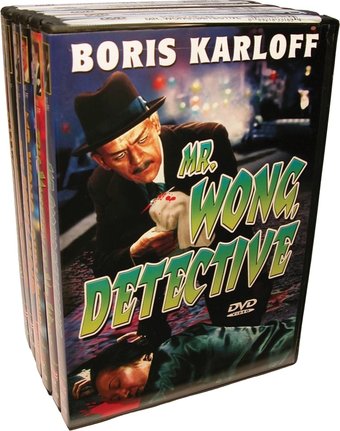 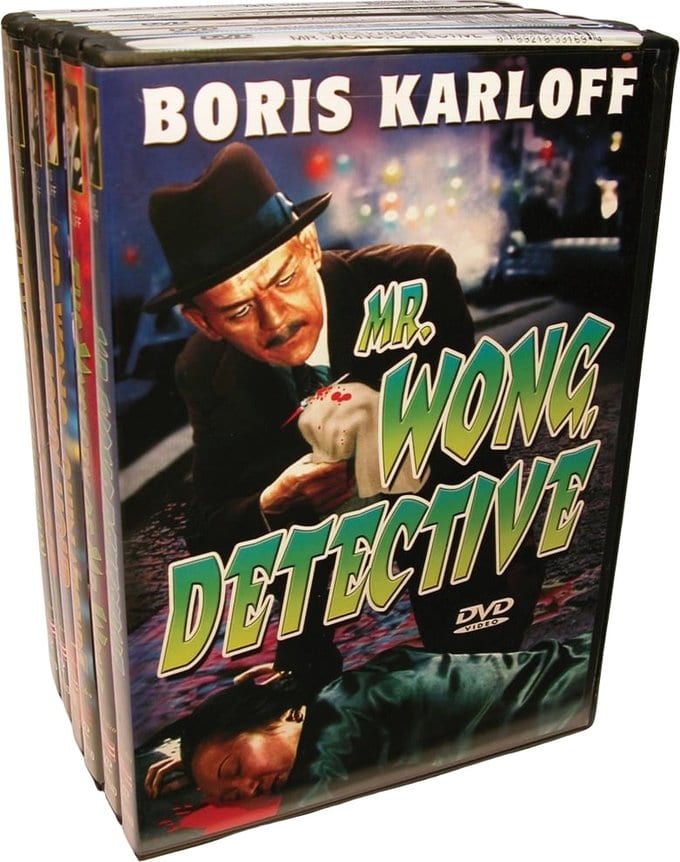 Mr. Wong, Detective (1938, B&W): Boris Karloff stars in the title role of Mr. Wong, Detective, the first of six Mr. Wong mysteries that were based on the work of author Hugh Wiley. When the life of industrialist Simon Dayton (John Hamilton) is threatened , he makes an appointment with the one man who might be able to help him, the Oxford-educated Oriental sleuth Mr. James Lee Wong (Karloff). When Dayton is found murdered before he can keep his appointment, Police Captain Sam Street (Grant Withers) enlists Wong's help in solving the murder. Suspicion falls on a business contact who is quickly arrested and charged with Dayton's murder. But as the investigation continues, Dayton's remaining business partners both turn up dead. It will take all of Mr. Wong's abilities to discover why a piece of broken glass was found near each victim and to discover the identity of the real killer.

The Mystery of Mr. Wong (1939, B&W): Detective James Lee Wong (Boris Karloff) must find the "Eye of the Daughter of the Moon," a priceless but cursed sapphire stolen in China and smuggled to America. His search takes him into the heart of Chinatown and to the dreaded "House of Hate" to find the deadly gem before it can kill again. The popularity of Asian detectives such as Charlie Chan and Mr. Moto prompted Monogram Pictures to purchase the rights to Hugh Wiley's successful James Lee Wong character.

Mr. Wong In Chinatown (1939, B&W): Boris Karloff stars as James Lee Wong in this thoughtful, action-packed mystery. The film gets off to a shocking start when Chinese Princess Lin Hwa (Lotus Long) makes an urgent visit to Wong's home where she is suddenly killed by a poisonous dart. Wong, together with hard-boiled Captain Street (Grant Withers) and ace reporter "Bobbie" Logan (Marjorie Reynolds) piece together a mysterious puzzle that involves airplane smuggling and international intrigue.

Fatal Hour (1940, B&W): Boris Karloff stars as the clever detective James Lee Wong in the fourth entry of the Monogram series. When a police officer is murdered, Captain Street looks to Mr. Wong to catch the killer. Prime suspect: Frank Belden Jr., whose father is a businessman well known for both his success and dishonesty. Mr. Wong faces increasing danger and is nearly executed himself as the investigation develops in treachery and complexity. As Mr. Wong follows the trail of dead bodies, he uncovers a jewel smuggling ring on the San Francisco waterfront and a case much larger than the death of a police officer. With the major studios on hiatus from monster movies, Karloff demonstrates his range of acting in this series as the resourceful Mr. Wong. Directed by William Nigh, The Fatal Hour also stars Grant Withers as the Police Captain and Marjorie Reynolds as fast talking girl reporter Bobby Logan.

Doomed To Die (1940, B&W): Boris Karloff returns to his role as the resourceful Oriental detective James Lee Wong in this fifth entry of the series. Shipping magnate Cyrus Wentworth is mysteriously shot in his office after his prize ocean liner is robbed and sunk. The obvious suspect is the son of his chief rival who is also engaged to Wentworth's daughter. Mr. Wong has different ideas and is determined to uncover the real culprit. Karloff's portrayal of Mr. Wong gave audiences a different side of the famed actor best known for his monster roles. Monogram Studios produced the series, created by Hugh Wiley and directed by William Nigh. Doomed to Die was Karloff's final appearance as Mr. Wong and features the return of Grant Withers as police captain Bill Street and Marjorie Reynolds as girl reporter Bobby Logan. Also of note is the appearance of character actor Henry Brandon (nee Kleinbach), best known for his role as the evil Barnaby in March of the Wooden Soldiers and as Fu Manchu in the Republic serial The Mask of Fu Manchu.

Phantom of Chinatown (1940, B&W): World renowned archeologist Dr. Benton returns from Mongolia with a mysterious scroll and immediately dies a horrible death by poison while delivering a lecture. Detective Jimmy Wong (Keye Luke) is called in to solve the case. With the help of Captain Street (Grant Withers) and Benton's beautiful secretary (Lotus Long), Jimmy becomes a human decoy to set a trap for the killer. This is the sixth and final episode of Monogram's Mr. Wong series featuring the Asian detective. Originally conceived for Boris Karloff, the script was rewritten for a younger actor, and presented as a prequel to the five previously released films. Keye Luke, best known for his portrayal as Charlie Chan's Number One Son, appears in what is his only starring role.

Detectives | Mystery | Suspense | Thriller | Detective
This product is made-on-demand by the manufacturer using DVD-R recordable media. Almost all DVD players can play DVD-Rs (except for some older models made before 2000) - please consult your owner's manual for formats compatible with your player. These DVD-Rs may not play on all computers or DVD player/recorders. To address this, the manufacturer recommends viewing this product on a DVD player that does not have recording capability.
Filter Results