The complete "Shadow of Chinatown" serial on two DVDs. 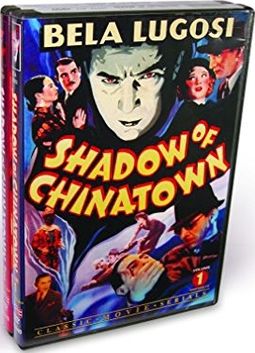 One of the longest film serials ever produced, THE SHADOW OF CHINATOWN stars Bela Lugosi as the nefarious Victor Poten, a man who possesses mysterious powers and is hired by a ruthless dragon lady to help her gain wealth and power. Five hours long and comprised of 15 chapters, this classic serial contains numerous cliffhangers as well as an appropriately creepy performance by the legendary Lugosi.

Vintage | Serial | Murder
This product is made-on-demand by the manufacturer using DVD-R recordable media. Almost all DVD players can play DVD-Rs (except for some older models made before 2000) - please consult your owner's manual for formats compatible with your player. These DVD-Rs may not play on all computers or DVD player/recorders. To address this, the manufacturer recommends viewing this product on a DVD player that does not have recording capability.