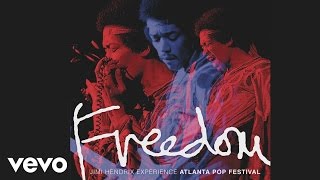 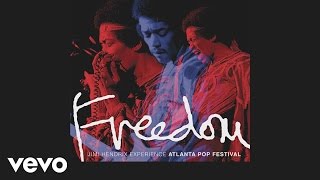 Audio Mixer: Eddie Kramer.
Liner Note Author: Bill Mankin.
Photographers: Sam Feinsilver; Crazy Jim Wiggins.
Jimi Hendrix's headlining appearance at the Atlanta Pop Festival would be the largest U.S. audience he would ever play to. Most people assume it was Woodstock, which was a larger festival, but by the time Jimi took the stage at around 9 a.m. on Monday morning, the Woodstock crowd was down to about 25,000 stragglers. Estimated between 300,000 and 400,000, the actual crowd at Hendrix's Atlanta Pop performance was hard to pin down due to the fact that many of the festivalgoers turned up after dark, in an effort to stay out of the stifling heat of Atlanta in the summertime. The trio of Jimi, Mitch, and Billy Cox had been touring for about two and a half months solid when July 4 rolled around, and they sound really tight kicking off the show. "Fire" starts the set, and one immediately notices how differently Billy Cox plays it versus Noel Redding. "Spanish Castle Magic" has Jimi trying out some new solo ideas and he really starts feeling it on a very improvisational, extended "Red House." A rare live performance of "Room Full of Mirrors" is followed by an absolutely incredible version of "Hear My Train A Comin'." Jimi is just in amazing form as the ideas just keep coming: the entire solo is so well constructed it could almost be composed. This is a guitar performance nearly equal to "Machine Gun" on Band of Gypsys, and worth the price of admission by itself. After a nice version of "Message to Love," things falter just a bit with Jimi blowing his vocal entrance and muffing some lyrics on "All Along the Watchtower" followed by a good, not great, version of "Freedom." He starts finding his guitar groove again though, and by "Hey Joe" he's once again in excellent form. A solid version of "Voodoo Child (Slight Return)" leads into a really nice extended version of "Stone Free" with some cool new solo ideas. "Star Spangled Banner" is actually punctuated with real fireworks and the set closes with another new song, "Straight Ahead." The music on Freedom: Atlanta Pop Festival has been available in collector's circles for some time, but it has never sounded better than it does here. Despite a brief lull mid-set, the revamped Experience turned in an exciting show on July 4, 1970, and with "Hear My Train A Comin'," Jimi turned in one of the greatest solos of his career. ~ Sean Westergaard

Jimi Hendrix
Both Sides of the Sky
$12.10 CD Sale
Add to Cart